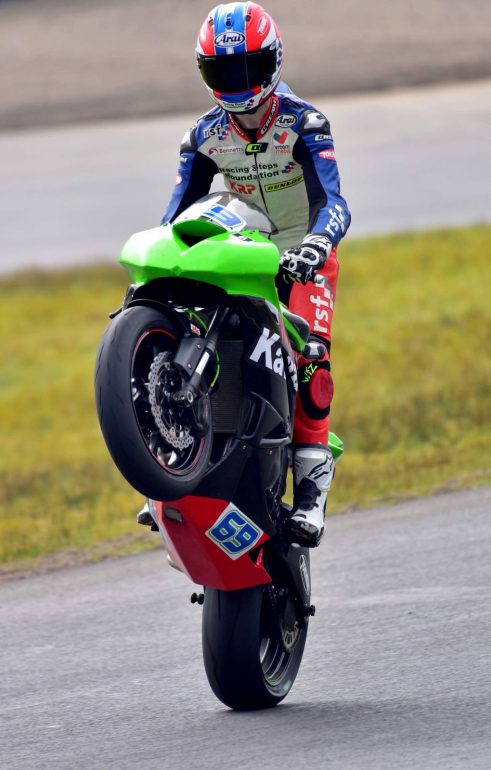 Rory Skinner marked his debut on a 600cc race bike with a hat-trick of wins this weekend, riding the Kirkcaldy Kawasaki ZX-6R in the KMSC and Scottish Formula 600 championship races at Knockhill.

Taking advantage of a free weekend in his British Talent Cup schedule, the 16-year-old from Perth travelled to the Knockhill circuit in Fife to compete on a ‘big’ bike for the first time. Despite having no prior testing of the largely stock machine, Rory left Knockhill with three wins, two further podium finishes, pole position and a fastest lap, a significant achievement for his first outing on a 600cc production bike.

“I’ve really enjoyed racing at Knockhill again and I just gelled with the bike straightaway,” said Rory. “After half a lap I felt right at home on the Kawasaki. We had a wet practice on Friday and in my first session in the dry I was able to qualify on pole. The races were great fun. Our bike is essentially a road bike with a few modifications and it was hard work against bikes running tuned engines and race suspension, but I was still able to win my first three races and take podium finishes in the other two.

“The Kawasaki has more than twice the power and weight of the 250cc bikes I’ve been riding for the past three years, as well as different tyres and brakes, so you are never sure how you will adapt to it, but now that I am old enough I wanted to start gaining experience of the bigger bikes and I couldn’t be happier with how things have gone. I’ve put in very competitive lap times and been able to adapt to the bike quickly. I’ve really enjoyed having some great battles and, of course, being back on top of the podium.”

While Rory will continue to race the 250cc machine in the British Talent Cup, he is also hoping to make more appearances on the 600 throughout the year. He added: “Big thanks to Kirkcaldy Kawasaki for providing me with the bike for this weekend. The British Talent Cup is my priority this season but I will be looking to do more races on the ZX-6R when the schedule allows. I’ve been doing a lot of training on my 450cc supermoto and racing a 600 is another important part in learning new skills and developing myself as a rider.”