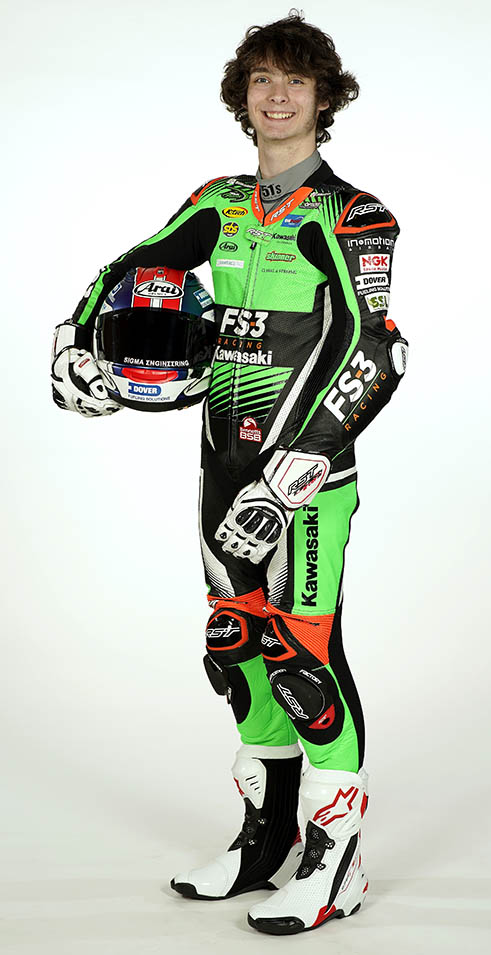 Born into a motorcycling family, Rory started racing mini-motos at the age of seven. After taking the ‘Novice of the Year’ title in the 2008 Scottish championships, he progressed to become runner-up in 2009 and the Scottish Junior 4.2 Mini Moto Champion in 2010.

That year also saw Rory head south and compete in the FAB Racing British Championship, where he won both the Junior and Junior Production Mini Moto titles. Two more British titles came the following year, in addition to winning the MiniGP 50cc championship on a Metrakit GP50 machine. In 2012 he moved up and won the British MiniGP 70cc title, along with the British Junior Production Mini Moto class.

Recognising his talent, the Scottish Auto Cycle Union granted Rory special dispensation to ride in the Formula 125 class at the age of 11, rather than the usual 12. Riding against older and more experienced riders on 125cc bikes Rory on his GP80 machine remarkably ended the season with a further three titles to his name.

After turning 12 in September, Rory was invited to compete at the final Aprilia Superteen challenge race of the season at Donington Park. Riding a borrowed Aprilia RS125 on a track he had never previously ridden on, Rory went on to top the podium in one of his four races, becoming the youngest ever race winner in this competitive and highly regarded series.

In 2014, Rory entered the Superteen full-time, a series which has developed the careers of a whole host of professional riders including world champions Casey Stoner, Cal Crutchlow, Sam Lowes and Chaz Davies, and Rory was determined to follow in the wheel tracks of such illustrious talent and make it to the MotoGP stage.  After a fantastic season Rory won the Superteens championship on his 13th birthday, adding his name to this prestigious winner’s trophy.

Between Superteen rounds, Rory took part in some rounds of the Scottish Championships at Knockhill and East Fortune, honing his skills on a Honda RS125 GP machine which he had once again been given special dispensation to ride in Scotland by the Scottish Auto Cycle Union.

During the 2014 season Rory also had the opportunity to wildcard in the European Moriwaki 250 Junior Cup which came to Brands Hatch for the BSB round.  Rory was then invited back for a second wildcard, this time at Assen, where he finished on the podium.

Behind the scenes were some truly great sponsors who all played a pivotal role in the 2014 season. Tokheim came on board and British insurance giants Bennetts picked Rory up after a ‘search for a star’ campaign. They helped him out in numerous ways throughout the year including enlisting the help of ex British and world superbike champion Neil Hodgson to advise and mentor Rory.

In October 2014 Rory was invited to attend the Red Bull MotoGP Rookies Cup selection event.  From over 1000 applicants from around the world, 108 riders were invited to Guadix circuit in Spain. Over the course of three days a panel of experts selected 12 of the best young riders from around the world to join the 2015 Red Bull MotoGP Rookies Cup… and Rory was one of them.

To round off a perfect year, Rory was contacted by Racing Steps Foundation who, having watched his progress over the past two years, wanted to help take him forward to reach his future potential.

In 2015, with the backing of Racing Steps Foundation, Rory joined Team KRP run by Mark Keen and entered the international stage with the Spanish RFME CEV National Championship. Following his 14th birthday in September, he then also dipped his toe into the FIM CEV Repsol Moto3 Junior World Championship (the breeding ground for past, present and future MotoGP stars). Running alongside his RSF campaign, Rory was also competing throughout Europe in the prestigious Red Bull MotoGP Rookies Cup (support race series to MotoGP through which both of 2015’s Moto3 and Moto2 champions graduated). Bennetts carried on their support for Rory throughout the 2015 season, as did Tokheim, and Rory was also confirmed as an Arai supported rider for all championships.

In 2016, Rory continued his education on the KRP-run FTR KTM in the Junior World Championship, as well as in the Red Bull Rookies, where he would go on to score podium finishes at Aragon and Assen on his way to sixth in the final standings. The following year opened with the now 15-year-old Rory winning the first race of the Rookies Cup, at Jerez, while the Junior World Championship brought best finishes of fifth place, now on a KTM RC250R (M36) run by KRP. The season wasn’t all rosy though, with a number of crashes – not to mention a lack of data for the KTM – denting the confidence and blunting his challenge.

With Racing Steps Foundation winding up its operation at the end of the 2017 season, Rory found himself without a ride for 2018. Dorna kindly stepped in, offering a place in the inaugural British Talent Cup. With four wins, Rory convincingly won the title. He also made the progression to bigger bikes, supplementing his Talent Cup outings with race winning Scottish championship appearances on a Kirkcaldy Kawasaki supplied ZX-6R and entering three rounds of the Pirelli National Superstock 600 championship, where he impressed each time.

In 2019 Rory remained on a Kawasaki. Running a largely standard, privately run, ZX-6R supplied by British Superbike legend Chris Walker, 17-year-old Rory once again followed in the tyre tracks of Crutchlow and Lowes by competing in the British Supersport Championship. Leading Scottish legal firm Watermans came on board as title sponsors and, in a sometimes challenging campaign, the young Scot developed throughout the season, ending the year as the top ranked Kawasaki rider and best rookie – taking a podium at Donington Park on his way to seventh in the final standings.

The performances did not go unnoticed and for 2020 Rory was picked up by the Team Appleyard Macadam Racing/Tysers Yamaha squad, Yamaha Motor UK’s officially supported team in the British Supersport Championship. The start of the season was delayed due to the Coronavirus pandemic but when it finally did get underway Rory was in sensational form. He made his mark with two runaway wins in the opening round at Donington Park, and followed them up with further doubles at Snetterton and Silverstone, becoming the youngest ever British Supersport champion with a further win on the Donington Park Grand Prix circuit in October, exactly one week after his 19th birthday.

With the British Supersport title in the bag, 2021 saw Rory move up to the premier British Superbike class with the Kawasaki Motors UK supported FS-3 Racing squad. Riding the new-for-2021 Kawasaki ZX-10RR, Rory scored a brace of podiums at Knockhill and finished top rookie of the season. The following year saw Rory and FS-3 right at the forefront of the championship. Skinner scored five podiums finishes to become the third qualifier for the title deciding Showdown, becoming the youngest ever Title Fighter at the age of just 20. Unfortunately a late season injury, sustained in a bizarre incident at Oulton Park, meant that Rory was unable to challenge for the title.

The summer of 2022 also saw Rory make his Grand Prix debut in the Moto2 class, taking on wildcard entries at the British and Austrian Grands Prix for the American Racing Team. The outings proved to be a success and, for 2023, Rory joins the team permanently to take on one of the toughest motorcycle racing championships on the planet.