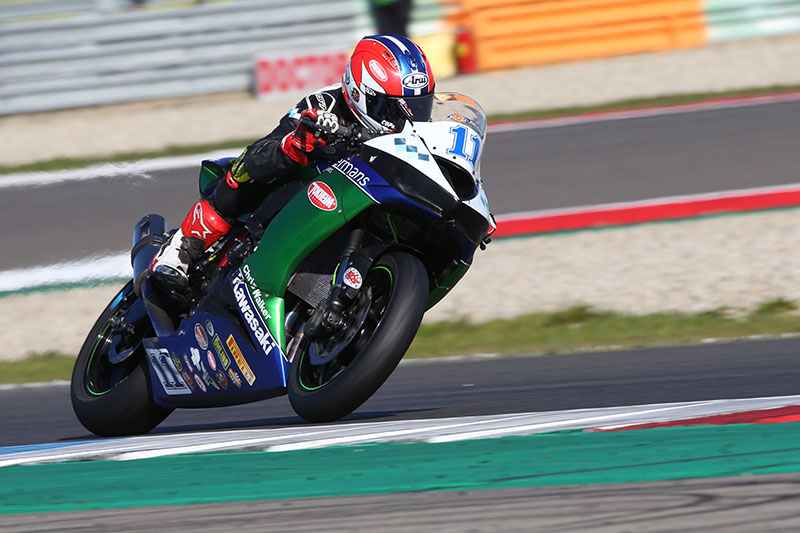 Having battled through from eighth on the grid and a tough first lap to take fourth in class in Saturday afternoon’s 12-lap Sprint race, the 17-year-old former Red Bull MotoGP Rookies race winner started sixth on the combined Supersport/GP2 grid for Sunday’s 15-lap Feature event.

Having launched his Chris Walker Kawasaki supplied ZX-6R well off the line, Skinner was able to battle with the leading group in the opening laps, running as high as third in the opening laps, before settling into a strong rhythm to maintain his fourth place to the chequered flag.

Rory’s 26 point haul moves him up to a clear seventh place in the championship in his rookie season, with two rounds remaining.

“It’s been a really good weekend,” commented Rory. “This is a year of learning for me and it was good to come to a circuit I know well. The bike has been working well all weekend and was once again the top supersport bike through the speed trap in the race. We found a good set-up and I’m really pleased that we were up there with the leading group, and to beat the official Kawasaki bikes with our little private team. Our team worked perfectly this weekend and we’re all learning all the time.”

Team MSR travelled to the Netherlands expecting it to be their swansong in the 2019 championship, due to unexpected costs incurred by a series of mid-season mechanical issues. However the team is delighted to confirm that it will be able to compete at the final two rounds, at Donington Park and Brands Hatch, after a number of backers agreed to support the team.

“I’ve been blown away by the support,” added Rory. “After Oulton Park we needed to refresh the engine and that meant that our 2019 budget was gone. As soon as it became known that we were struggling to make the last two rounds, we received an offer to support us with our tyres for the final rounds, which is our single biggest expense, while two other individuals have made a contribution that will cover our fuel costs. I am so grateful to those people, as well as all the others who have helped to get us on track this year, and I will be doing everything I can to reward their faith in me with the best results we can manage.”

Round 11 of the series takes place at Donington Park in two weeks’ time, on the weekend of 4-6 October.