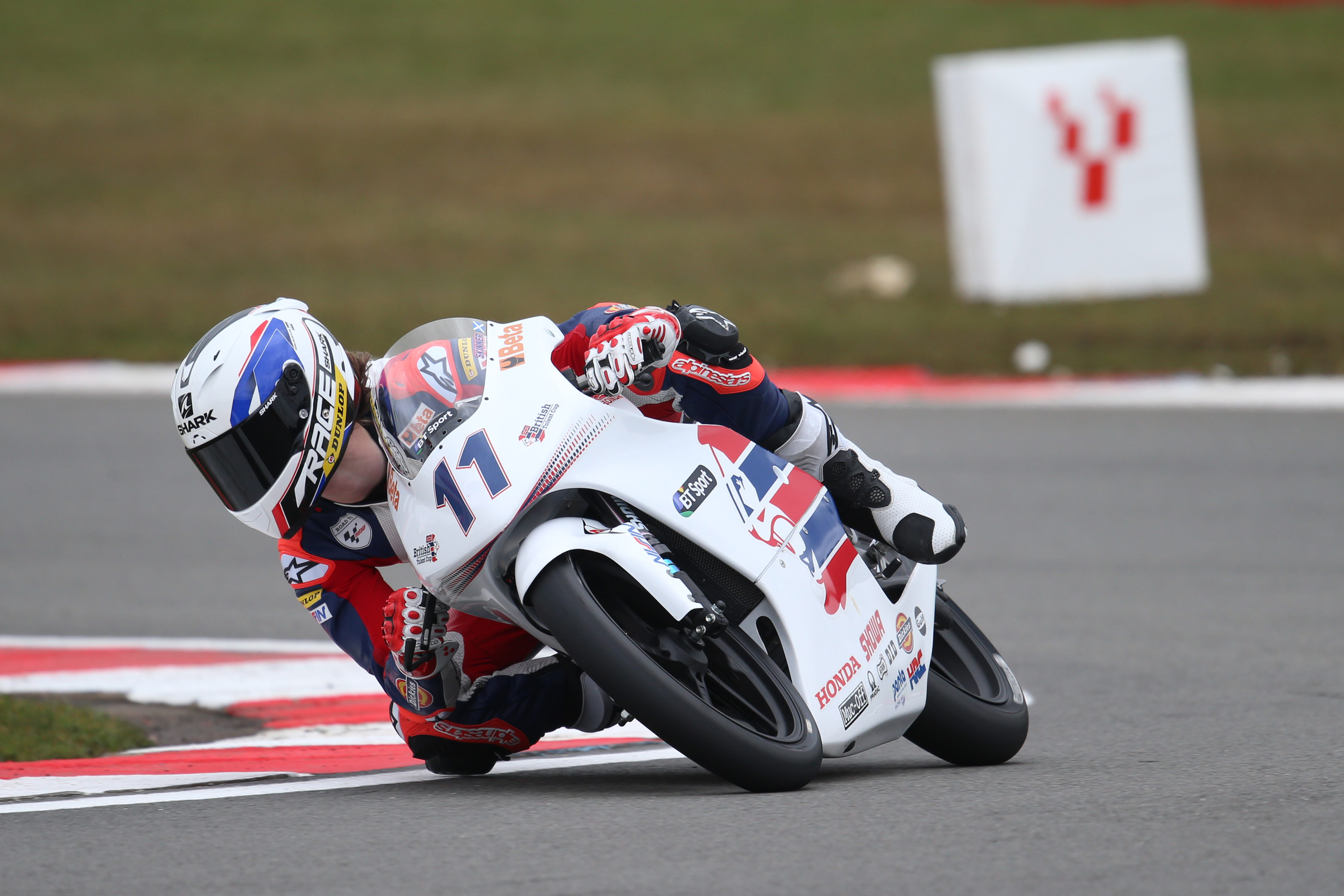 Rory Skinner came from the back of the grid to finish 10th in the inaugural British Talent Cup round at Donington Park, held on a weekend of difficult weather conditions that ultimately saw Bank Holiday Monday’s race cancelled due to a waterlogged track.

Having set the fastest lap time in last month’s pre-season test in Valencia, the 16-year-old racer from Perth went to the Donington Park race high on confidence. The Scottish rider set the second fastest lap time in both of Saturday’s wet free practice sessions, turning in more laps than his competitors and running a strong race pace on his own. Sunday saw Rory qualify sixth in dry conditions, before a short shower ahead of the afternoon’s opening race saw the race declared as ‘wet’ with riders taking to the track on treaded rain tyres.

Drama followed ahead of the race when Rory slid off on the formation lap. Despite getting back to the pits and having time to replace the damaged fairing on his Honda NSF250R machine, Skinner was required to start the race from the back of the grid.

A good start helped Rory make progress in the early part of the 15 lap race, running in the group battling for fifth, but the former Red Bull Rookies race winner was unable to get a good feel from the front end of his machine in the slippery conditions and was forced to ride conservatively and bring his bike home for a points scoring finish, in 10th.

“Tenth place certainly isn’t what I came here for and isn’t representative of my pace in this championship,” said Rory. “I got a really good bike set-up in Valencia but that didn’t really translate here at Donington Park and I never found a good feeling with the bike all weekend.

“I’m not happy with 10th but actually there are still a lot of positives to take out of the weekend. We’ve come away with six championship points from a race where I went down the road on the formation lap and had to come from the back of the grid. The weather conditions were different in every session and that made it difficult to make the progress that I would have liked to have with the bike. I’m disappointed we didn’t get an opportunity to race again on Monday, because we had some changes planned that should have solved the issues we had, and I am looking forward to coming back here next month, when hopefully the weather will be better and I can get my season properly up and running.”

The British Talent Cup returns to Donington Park on the weekend of 25-27 May, when it supports the Superbike World Championship round at the Leicestershire circuit.