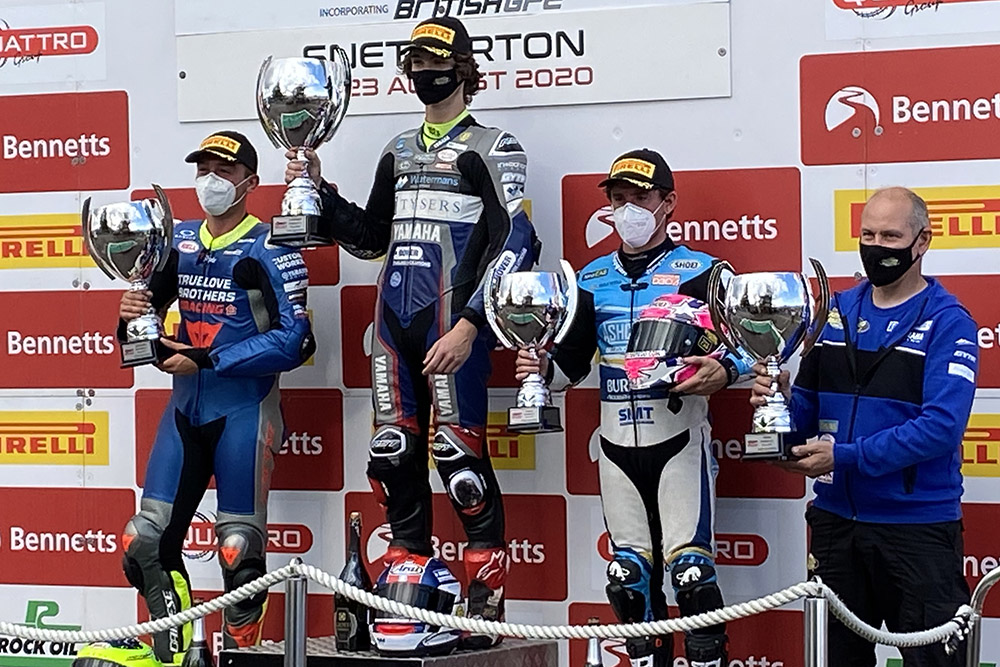 Rory Skinner made it three wins out of three in the 2020 Quattro Group British Supersport Championship with a win in today’s Sprint race at Norfolk’s Snetterton circuit, but the 18-year-old was made to work hard for his win in difficult conditions.

Starting from pole position, the Tysers Yamaha rider was involved in a close battle with fellow Yamaha riders Bradley Perie, Harry Truelove and Lee Johnston in the opening laps, before hitting the front on lap four of 12.

Windy conditions, combined with the long Snetterton straights giving a slipstream to the following riders, made it impossible to break away but Rory was still able to forge out a 1.5 second lead with two laps remaining, only to be held up by a backmarker through the twisty infield section. That allowed Truelove to get back into the slipstream of Skinner in the final lap, but the young Scot remained cool to lead out of the final corner with a big enough advantage to avoid being drafted across the line, finishing 0.189 seconds ahead of Truelove, with Isle of Man TT winner Johnston third.

“That was a bit of a weird race,” said Rory. “It’s been very windy here all weekend and the track has changed not just from session to session, but from lap to lap. It took me a few laps to find my rhythm but I managed to pull out a lead of over a second until I came across a backmarker, who stayed on the line despite blue flags being out. That cost me some time but thankfully I was able to keep enough of a gap until the line.

“It’s a great result for the championship and hopefully we can do more of the same tomorrow. Many thanks again to all my team and mechanics, who’ve given me a great bike in the circumstances. It’s been difficult to get a lot of good quality running time because of the conditions and this was our first proper long run of the weekend, so we’ll try a few new things in the morning warm-up and hopefully make another step up for tomorrow’s race.”

Tomorrow’s 14-lap Feature race takes place at 15:35 and can be seen live on British Eurosport 2.