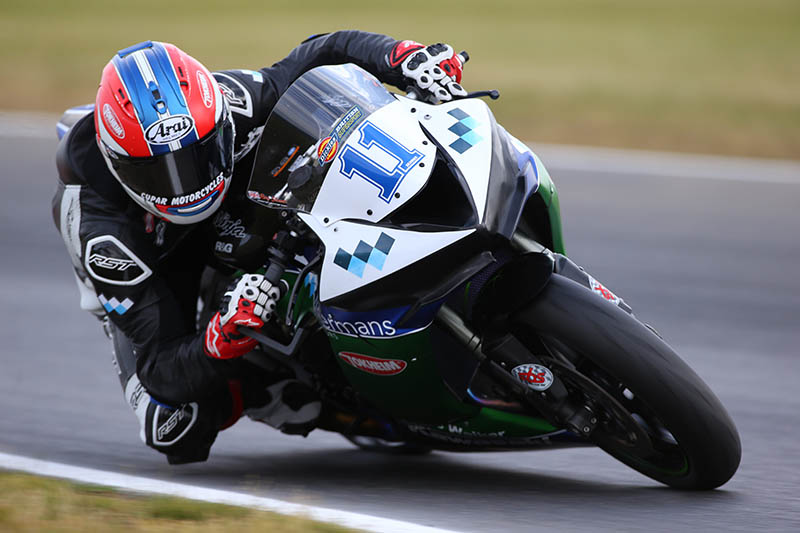 Rory Skinner and his Watermans Team MSR squad were the best placed Kawasaki runners in round six of the 2019 Dickies British Supersport championship at Snetterton this weekend, grabbing two top 10 finishes in their first appearance at the fast Norfolk circuit.

The small privateer team worked hard to find an optimal chassis set up for the 17-year-old British Talent Cup champion but made step-by-step improvements throughout the weekend, claiming ninth in class in Saturday’s qualifying and 10-lap sprint race, before taking a step forward and ending his weekend with an eighth in Sunday’s 12-lap feature event.

Having never raced the ZX-6R around Snetterton, Skinner battled grip and traction problems throughout the weekend but the team improved the suspension settings in each session, improving his best lap time from a 1:54.028 in qualifying to a 1:53.421 in Saturday’s race and a 1:52.944 on Sunday.

Starting from 10thon the combined Supersport/GP2 grid (eighth in class) for Sunday’s race, Rory was able to run with the battle for fourth in the opening laps of the race, before dropping back as his rear tyre wore in the latter stages. With grip levels dropping off and chatter setting in, the class rookie rode sensibly to bring his Chris Walker Kawasaki supplied ZX-6R home in eighth, giving him 15 championship points over the weekend’s two races.

Rory said: “Overall it has been a challenging weekend, but there are plenty of positives for us to take away.

“We’ve struggled to get a good bike set up all weekend and we made some more changes overnight, which definitely improved things when the tyre was new. I was able to run with the group battling for fourth in the opening laps but by mid race the rear grip level dropped right off and the chatter problem returned, and I had to just bring it home for the points.

“An eighth and a ninth aren’t the results I want, but we were the top Kawasaki in qualifying and in both races and, as a team, we made massive steps with the bike set up over the weekend. We also seem to have sorted out the reliability problems we’ve been having since Donington Park and that bodes well for the second half of the season.

“Next up is Thruxton, which is a circuit I’ve only ever seen on TV. It’s another fast circuit, but thankfully our Stuart Young tuned ZX-6R has been strong through the speed traps this weekend and I’m looking forward to getting out there and learning another new track.”

Round seven of the 2019 Dickies British Supersport Championship takes place at Thruxton, in Hampshire, on the weekend of 2-4 August.