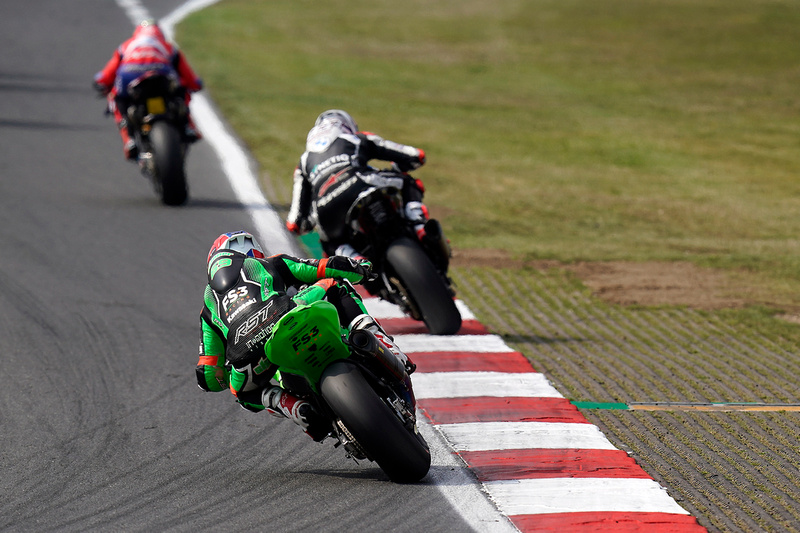 Rory Skinner grabbed three more points scoring finishes, including two top 10s and a front row start, and quite a few headlines after a dramatic Snetterton round of the 2021 Bennetts British Superbike Championship last weekend.

The 19-year-old British Supersport Champion found himself all over social media on Friday after a spectacular ‘save’ during Friday’s first free practice session, but went on to end the day with the seventh fastest time to go through to Saturday’s ‘Superpicks 12’ qualifying shootout, where he placed his FS-3 Racing Kawasaki ZX-10RR 12th on the grid.

Saturday’s 12-lap ‘sprint’ race saw the young Scot back in the top 10, finishing eighth overall. He backed that up with the fastest time in Sunday morning’s free practice session, before coming from 11th on the grid to take ninth in Sunday’s first 16-lapper – battling with some of the championship’s biggest names and taking the second fastest lap of the race to secure a front row start for the weekend’s third and final outing.

Unfortunately Rory was unable to capitalise on his second placed start after another spectacular incident at the end of lap two. Running in seventh, just off the back of the leading group, Rory ran a little wide and on to the grass on the exit of the final chicane, Murrays, and astounded spectators as he wrestled the bucking and weaving Kawasaki under control, albeit losing a number of places.

Despite staying onboard the ZX-10RR, the violence of the incident caused muscular damage to the teenager’s neck and he dropped back outside of the top 10. He had another fortunate moment on lap nine, when he narrowly avoided crashing when another rider’s machine dropped fluid – an incident which claimed team-mate Lee Jackson among its victims. That caused a red flag stoppage and in the restart, held over just five laps, Rory fought back the discomfort to come home 15th for another championship point.

“Overall I’m pretty happy with how it went at Snetterton,” said Rory. “The speed was there but we struggled a bit with tyre wear over the race distance. I was pleased to get two top tens and another front row start, although I was a bit second hand after the incident in the third race. It was a big moment and my helmet hit the tank. I was quite relieved to see it stopped but it was hard work in the restart, I’m feeling fine now though and looking forward to Silverstone this weekend.”

The short National layout at the famous Northamptonshire circuit plays host to three more races this weekend, the final meeting before the season ending Showdown rounds take place. Currently lying 12th in the standings, Rory retains an outside chance of leaving Silverstone with a title fighting top eight place, but for now the teenager is keen to continue the momentum gained in recent rounds.

“I like Silverstone,” he added. “We had a test there right at the beginning of the season, but we’ve moved forward a lot since then. In those early tests we were running a much more relaxed chassis set-up, a bit closer to a superstock bike, but this will be my first time there with the full superbike settings we’ve developed. It’s always a close lap time around there and I’m keen to see what we can do this weekend.”

Fans can follow the action live on British Eurosport 2 throughout the weekend.