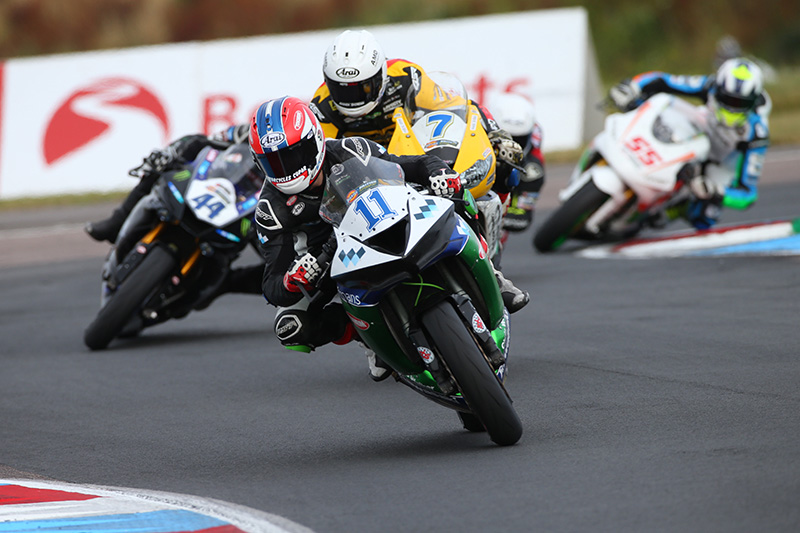 Thruxton, Britain’s fastest race track with a lap record in excess of 110mph for the middleweight machines, is the only circuit on the calendar that the Watermans Team MSR Kawasaki rider has absolutely no previous experience of, and Friday’s two, 25 minute sessions were spent learning the layout of the featureless airfield circuit and finding a good base set-up for the Kawasaki ZX-6R.

On Saturday morning, the 17-year-old British Talent Cup champion chopped 1.4 seconds from his practice time to qualify 10thon the combined Supersport/GP2 grid (eighth in class) before finishing seventh in class in the afternoon’s 12-lap Sprint race.

“On one hand I’m fairly happy with that, but on the other hand I’m a bit disappointed,” said Rory. “Yesterday we just used old tyres to learn the circuit and we made a big step when we switched to new tyres for qualifying this morning. Unfortunately we went in the wrong direction with the changes we made between qualifying and the race and that led to some chatter problems after a few laps in the race. Thruxton is a really unusual circuit, and so fast, so seventh is a decent enough result on our first visit here, but I’m a bit disappointed that we weren’t able to be a little bit more competitive in the race.

“It’s good to be the top Kawasaki once again, in both qualifying and the race, and our ZX-6R certainly isn’t lacking speed, which is a testimony to the work carried out by Stuart at Stuart Young Tuning, and Alan at Harrison Performance. We’ll try a few more changes to the chassis in the morning warm-up and if we can find that little something extra, hopefully we can make the jump to the group in front of us in the feature race. It’ll be a long hard race, as tyre wear is heavy around here, but if we can dial out the chatter then I’m looking forward to a good battle.”

Tomorrow’s 18-lap Feature race is scheduled for 15:40 and will be broadcast live on British Eurosport 2.