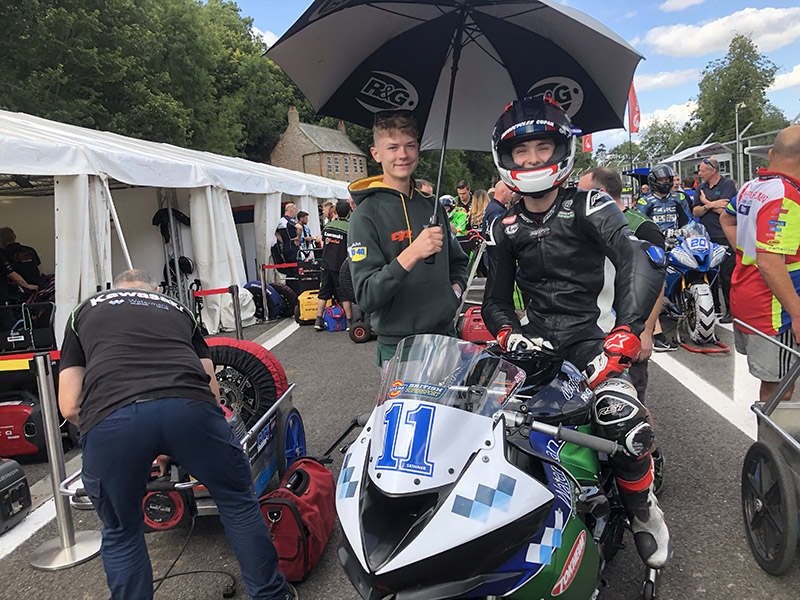 Rory Skinner ended his first big bike meeting at Cadwell Park with an excellent seventh placed finish in today’s Dickies British Supersport Championship round, despite riding with an arm injury sustained in a crash during yesterday’s Sprint race.

The 17-year-old Perth rider crashed out of Saturday evening’s race on the second lap, gouging a hole in his right arm and necessitating a hospital trip to clean and stitch the wound. Having been passed fit to ride on Sunday morning, the Team MSR Kawasaki rider took up his place in 18thon the combined Supersport/GP2 grid, his lowly starting place being due to the lack of a qualifying lap time in Saturday’s race.

After being held up in a battle between a number of GP2 competitors in the opening laps, Rory was able to work through to 14thon the road and ninth in class, before settling into a good rhythm despite some problems resulting from his arm injury. With a few more overtakes and some retirements ahead of him, the British Talent Cup champion was able to come home seventh in the Supersport class.

“It was a hard and tiring race,” said Rory. “The injury itself wasn’t so painful but the damage meant that I was lacking some strength in my right arm, and as a result I had to adapt my riding style. I was adjusting my body position and holding on a lot harder than usual with my right hand. That was giving me bad arm pump troubles and made right handers hard work as the race went on.

“Taking the positives, this is my first visit to Cadwell Park on a big bike and I am still learning the track, and in particular where you can overtake. I was happy with my times in qualifying and we’ve made a few changes to improve the bike this weekend. It’s hard to know what we could have achieved had I been fully fit and starting from further up the grid, so seventh is a good result in the circumstances. Thanks, as always, to the team and all the BSB staff, marshals and medics, who helped me after the off on Saturday. Now I have three weeks to get fit before the next round at Oulton Park.”

The next round of the championship takes place at Cheshire’s Oulton Park on the weekend of 6-8 September.