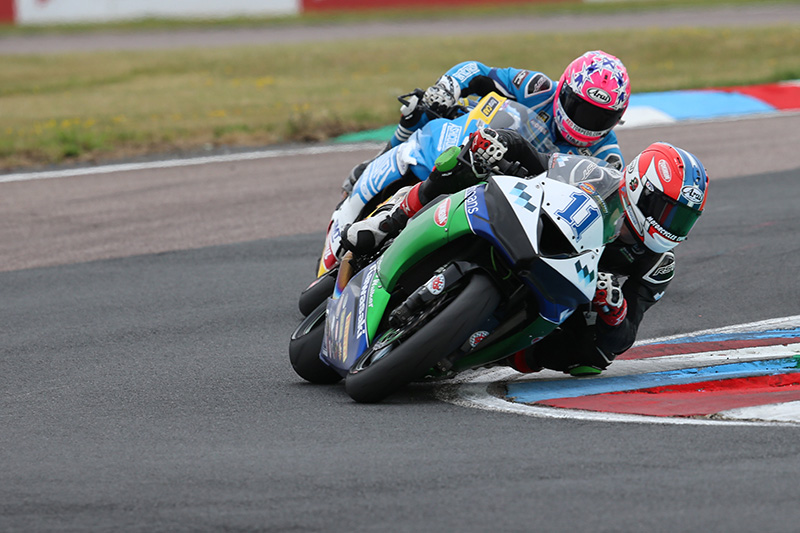 Watermans Team MSR rider Rory Skinner moved into the top 10 of the 2019 Dickies British Supersport Championship despite a weekend of mixed fortunes at the Thruxton race track in Hampshire.

The 17-year-old Perthshire rider was making his first appearance at what is the UK’s fastest circuit and scored 16 championship points to move up to 10thin the standings, despite a number of small issues throughout the weekend.

The British Talent Cup champion spent Friday’s two 25 minute practice sessions on used tyres as he learned the track and found a base setting for the team’s Chris Walker Kawasaki-supplied ZX-6R. Using new rubber for the first time, Rory lopped 1.4 seconds off his previous time in Saturday’s qualifying session to take eighth on the supersport grid for Saturday’s 12-lap Sprint race. A good run in the race, despite set-up problems, saw Skinner come home seventh in class and top Kawasaki.

Changes to the suspension settings saw Skinner set his best lap time of the weekend in Sunday morning warm-up, as he ran a full sequence of laps in the 1:17 bracket to give hope for an improved second race.

Starting from 11thon the combined Supersport/GP2 grid, Rory lost ground in the opening laps as he was barged out wide on the opening lap, and then again on lap two, as he took avoiding action to miss the fallen Ben Wilson and his stricken machine.

Wilson’s crash brought out the Safety Car, which had also been deployed in Saturday’s race, and allowed the group to close up. Rory was able to enjoy a brief battle with Isle of Man TT winner Lee Johnston as he moved up to seventh place, but despite the set-up remaining unchanged, he was unable to replicate the positive feeling from morning warm-up and struggled with chatter issues throughout the 18-lap race. A technical issue five laps from home saw the bike lose power, causing the lap times to drop by a second and a half, resulting in Rory dropping two places in the closing stages as he brought the bike home for seven more championship points.

“Overall a bit of a frustrating weekend,” said Rory. “I’ve never been to Thruxton before, so if you’d said to me beforehand that I would get two top 10 finishes I’d probably have been happy enough, but all weekend it has felt like that for every step forward we made, we took another one back, and we didn’t fulfil our potential.

“After making some changes that didn’t really work for the Sprint race, we found something I was really happy with on Sunday morning and we did a great seven lap run on an old tyre in warm-up. I went into the race thinking that if I made a good start then I would be able to run with the guys who were eventually fighting for the podium. Unfortunately, despite us making no changes to the bike at all between then and the race, the feeling and the consistency just wasn’t there. I just couldn’t do the lap times and struggled with a chatter problem that got worse throughout the race. In the last few laps the bike seemed to lose some power and I couldn’t do anything about the guys overtaking me. It felt like a fuelling problem, but we’ll have to look into it when we get back to the workshop. It’s a real shame as the bike had been really fast and reliable all weekend.”