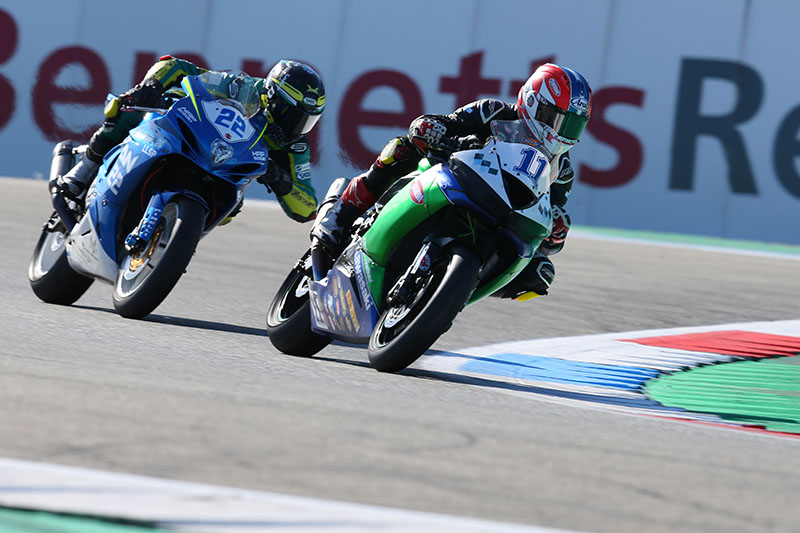 After qualifying eighth on the combined Supersport/GP2 grid, the 17-year-old found himself baulked and shuffled back to 10thon the opening lap, working his way through to fourth in class (sixth overall) by the end of the 12 lap race.

The Watermans Team MSR rider was the fastest supersport rider through the speed trap on his Chris Walker Kawasaki supplied ZX-6R, topping 158.2mph down the MotoGP circuit’s snaking back straight as he lowered his fastest lap time from qualifying and set about catching and passing 2017 race winner Eemeli Lahti.

Skinner moved past the Suzuki man on lap nine, taking fourth in class, and although he was able to carve over a second and a half out of third placed Richard Kerr over the last three laps, the race was just too short to be able to challenge for a podium finish around the famed ‘Cathedral of Speed’.

“I’m really happy with that ride,” said Rory. “I almost ran off the track at turn seven on lap two. One of the local riders braked earlier than I expected and I had to take avoiding action. That caused me to get a little bit separated from the guys in front but I was able to get my head down and put in my best laps of the weekend. I couldn’t quite close down the gap to Kerr for third, but I was really happy with my pace. I ran my last five laps in the 1:40s and the only other guy to do that was (race winner) Jack Kennedy. That bodes well for tomorrow. We are starting from the second row, so if we can get away with the front runners, I am confident that we can have the pace to run with the podium guys.”

The result sees Rory move up to seventh in the championship standings and, by virtue of his fastest lap time from today’s race, he will start tomorrow’s 15-lap feature race from sixth place on the combined grid (fourth in supersport). Unfortunately tomorrow’s race could well be Team MSR’s final outing of the season, as a number of mid-season technical issues have decimated the team budget and make participation in the final two rounds unlikely, without additional sponsorship coming on board.