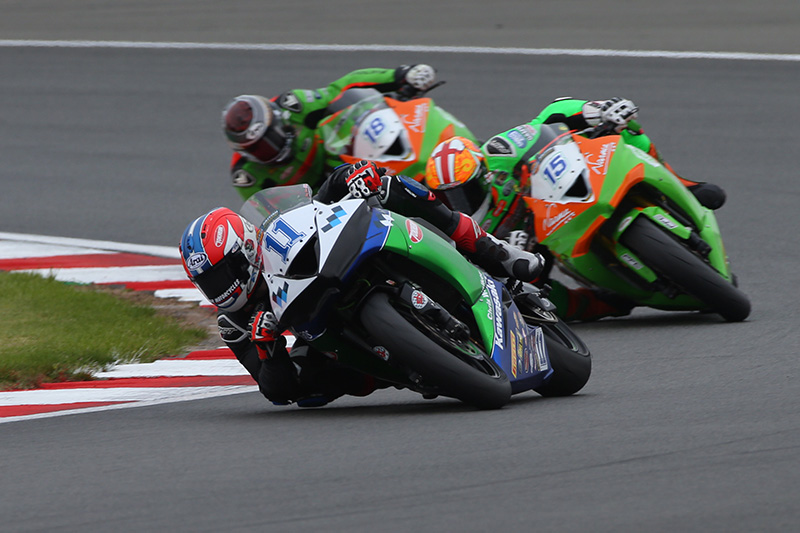 Watermans Team MSR Kawasaki rider Rory Skinner took a career best fifth place in today’s 20-lap Sprint race at Donington Park, charging through the field after making a bad start that saw him cross the line 21stat the end of the first lap.

The 17-year-old Scot qualified 13thon the combined GP2/Supersport grid (10thin class) to head an all-Kawasaki fifth row, but when the lights went out the reigning British Talent Cup champion saw his ZX-6R wheelie off the line, causing him to drop right to the back of the 26 rider field.

Despite drops of rain falling throughout the race, as well as a gear selection problem, Skinner cut through the pack with a series of impressively fast laps on the pace of the leading riders. After overcoming fellow Kawasaki riders Ross Twyman and Ben Wilson in the battle for sixth in class, Rory was able to pick off Richard Kerr on lap 13 of 20, to take seventh on the road and fifth in class, in what is just his third weekend in the championship.

“We’ve made a good step up this weekend and I’m happy with that,” said Rory. “This is our first weekend with a full supersport-spec engine and I’m really enjoying riding the Kawasaki. I’m a bit annoyed with the start. I just dropped the clutch and the front wheel came up, which gave me a lot of work to do, but I got my head down and was able to make up places despite having an issue with fourth gear. I’m really happy to take the fifth place. I feel that I had the pace for a podium today and fifth on the grid puts us in a good place for tomorrow. There’s a forecast for rain tomorrow, but whatever happens we’ll just take it as it comes.”

Rory’s best lap time for the race elevates him to a season’s best of fifth on the grid (fourth in class) for tomorrow’s 24-lap feature race, which can be seen live on Quest TV (Freeview channel 37).