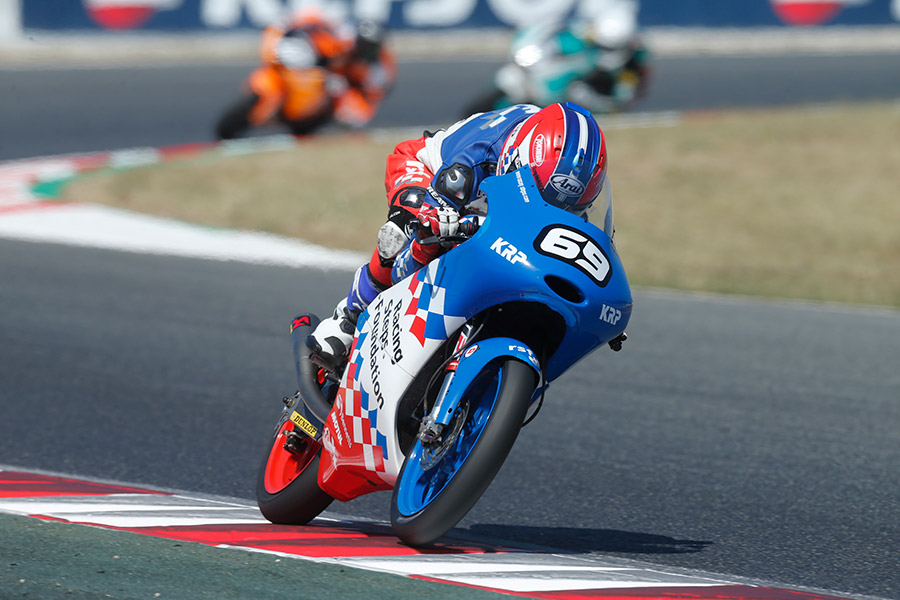 Rory Skinner his best season-best result in the second and final race of the third round weekend of the FIM Moto3 Junior World Championship at the Circuit de Catalunya in Barcelona.

Having already scored a 15th place finish in the day’s opening race, Rory was targeting a finish closer to the top 10 in race two.

With ambient conditions later in the afternoon hotter than in the morning’s affair, track temperatures were also higher leading to slower lap times and riders struggling to maintain a constant level of grip to their rear tyre.

Many riders struggled to maintain that level of grip, with the race becoming more of a war of attrition. Skinner and Jones dealt with that perfectly.

Following a steady start, Rory – and RSF/KRP teammate Dan Jones – gradually began to make their way up the field following the opening laps, aided by riders falling away in collisions or high side incidents.

With the final tours closing in, Skinner had made his way up to eighth place, with Jones 14th. Further drama occurred on the last lap, as second placed Mattia Casadei (SIC Squadra Corse/Honda) high sided out of the race from second place, promoting Skinner to seventh place, and Jones to 13th.

Rory was further able to pass the pair of Vicente Perez and Thai racer Apiwath Wongthananon around the second half of the lap to move into fifth position and rapidly sprint away by over half a second to comfortably cross the line in fifth position.