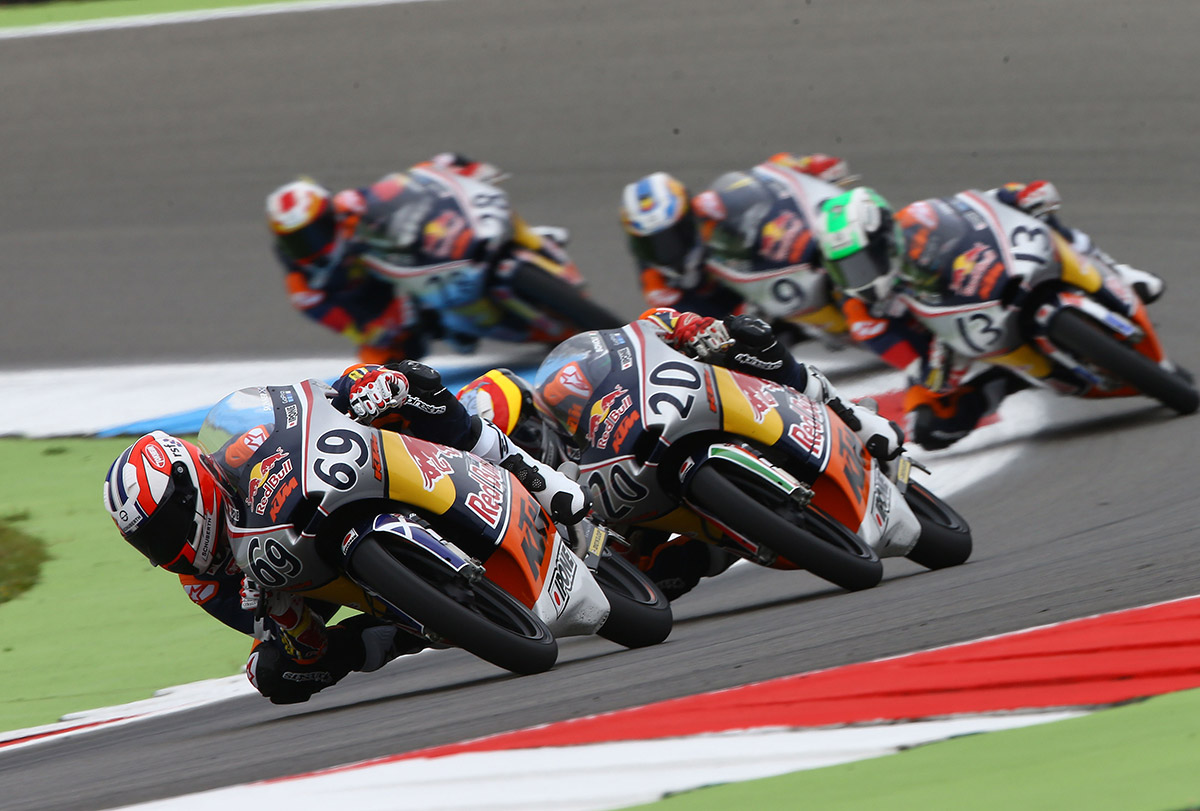 Perth racer Rory Skinner moved up to fourth place in the Red Bull MotoGP Rookies Cup championship with a pair of top 10 finishes at the historic Assen circuit in the Netherlands last weekend.

In his fourth appearance at the ‘Cathedral of Speed’ the 15-year-old Scot, who was a race winner at the opening round in Jerez, was second fastest in Friday’s qualifying session and ran a strong fifth in Saturday’s opening race, only narrowly missing out on a podium finish. Sunday’s 14-lap race proved more challenging following a heavy rain shower prior to the start, but Rory gave a mature performance in the difficult conditions to take ninth place at the flag. With 18 points from the two races, Skinner moves up to fourth in the championship, with four of the series’ 13 races gone.

Speaking of his weekend, Rory said: “In many ways it was a difficult weekend but there are a lot of positives to take away with us. Qualifying went well and I was able to put in consistently fast laps and end up just 0.1 second off pole position.

“Race one was a big battle and I could see that everyone in the group battling for second just wanted to keep passing and repassing, rather than getting their heads down and trying to put in fast laps. I decided to stay at the back of the pack and bide my time. I made some moves, worked my way up to the front of the group and was third going into the penultimate corner. I left a little bit too much room though and left just enough of a gap for another rider to get his front wheel up the inside of me. It was my own fault. I ran wide and finished fifth, less than half a second from second place.

“Sunday’s race took place in weird conditions. It rained as we were getting ready to go out and the track was wet when we went out on our sighting laps. It dried quickly though and by the time we formed up on the grid the track was almost completely dry. We all had wet weather tyres on but I made a last minute change back to the dry weather suspension settings.

“Whatever the reason, I just didn’t adapt. Maybe it was because I am one of the bigger riders and I worked the tyres harder but whenever I tried to push it felt like I was going to crash. We had some rain towards the end of the race and some riders went down, but I was able to bring the bike home in ninth and was again in that group for second place, just over a second off a podium finish.

“Although I didn’t work as well with the bike as I would liked to have, I’ve come away from Assen with some good points and the feeling that I’ve had the pace to be on the podium. We’ve got a busy few weeks ahead and I am now looking forward to racing in Germany next weekend.”

Rory’s next outing is again in the Red Bull MotoGP Rookies Cup and takes place alongside next weekend’s German Grand Prix at the tight and technical Sachsenring circuit. The following weekend he travels to Valencia in Spain to take part in the highly competitive FIM Moto3 Junior World Championship, in which he currently lies in eighth position on the Racing Steps Foundation/KRP KTM.