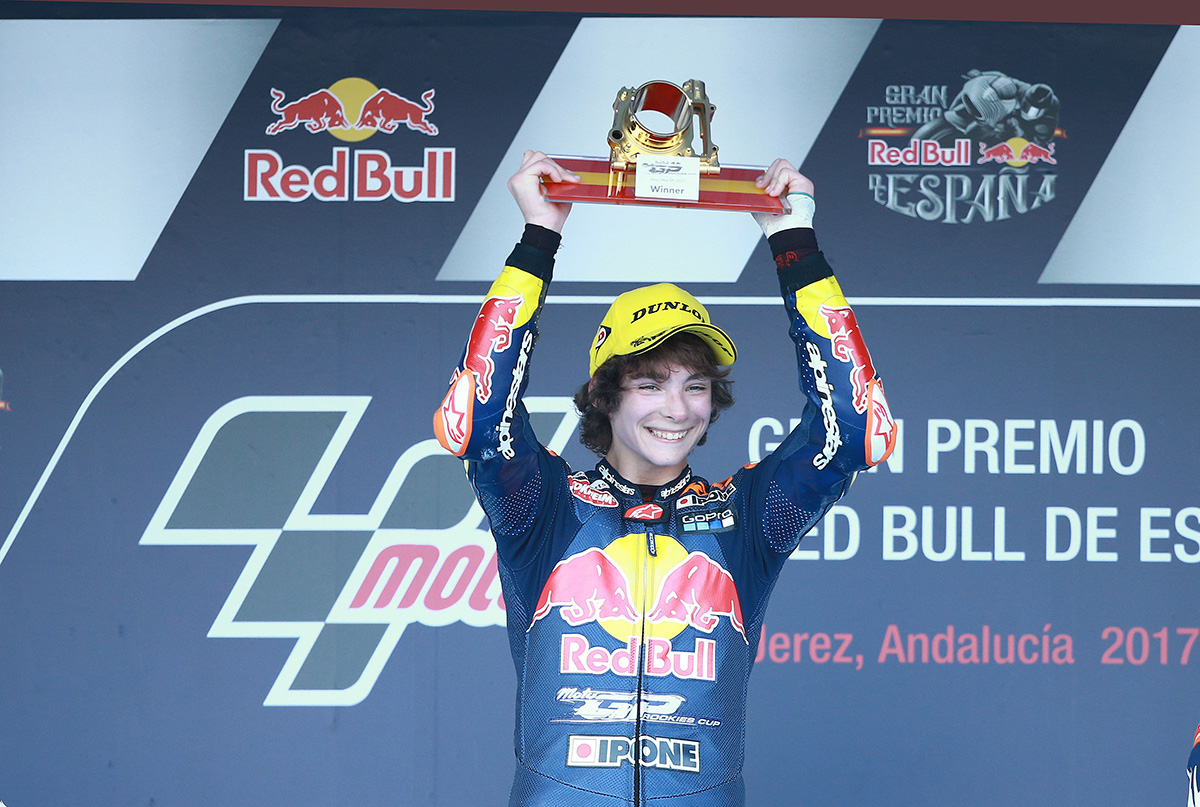 British teenager Rory Skinner took his first win on the international stage this weekend, standing on top of the podium in the opening round of the Red Bull MotoGP Rookies Cup, held alongside the Spanish motorcycle Grand Prix in Jerez.

The 15-year-old from Perth, in Scotland, joins an illustrious list of names to have won in the class, including world champions Johann Zarco, Danny Kent and Brad Binder. He becomes the first Scottish rider to win a round of the series, to which only the world’s most promising motorcycle racers are invited, and is the third Brit, behind Kent and Bradley Ray to win a race in the championship.

Starting from ninth place on the grid, Rory fought through to take the lead early in Saturday’s opening round of the 2017 season, setting the pace as he pulled away from the pursuing pack of riders and held the lead until lap 15 when Japanese Ai Ogura managed to close the gap and make a pass. The crowd were denied the chance of a last lap battle to the flag when the race was stopped prematurely due to an accident further back in the field. With the result declared as at the end of the last lap completed by all riders, the Scot took the victory by less than half a second from his Japanese competitor.

Unfortunately Rory was unable to repeat his success in Sunday’s second race, as he collided with another rider as he fought through the pack on lap two. Both riders crashed heavily but escaped serious injury, and Rory’s 25 point haul from Saturday’s race sees him lie fifth in the championship, with two of the 11 races completed.

Speaking after the races, Rory said: “In Saturday’s race I got a bad start and was down in around 13th. A couple of riders crashed in front of me and I was able to make the most of some of the others being quite cautious. When I closed the gap to first quite quickly I tried to make a breakaway. Ai followed me and when he passed, I was able to follow him and see what he was able to do. I felt quite comfortable sitting behind him and I wasn’t worried because I felt that I could go past him. You can’t really make a plan in the Rookies Cup but if it had come down to a classic Jerez last corner then I felt I would have been alright. As it was the red flag came out and I was delighted to take the win and stand on top of the MotoGP podium.

“It was disappointing not to score on Sunday but there are many positives to take from the weekend. It was tough coming through from ninth on the grid and unfortunately I made another bad start and collided with another rider on the second lap. I feel that I am riding well and looking forward to the rest of the season.”

Rory’s next outing is at round two of the FIM Junior Moto3 World Championship, held at Le Mans, in France, on the weekend of 19-21 May.