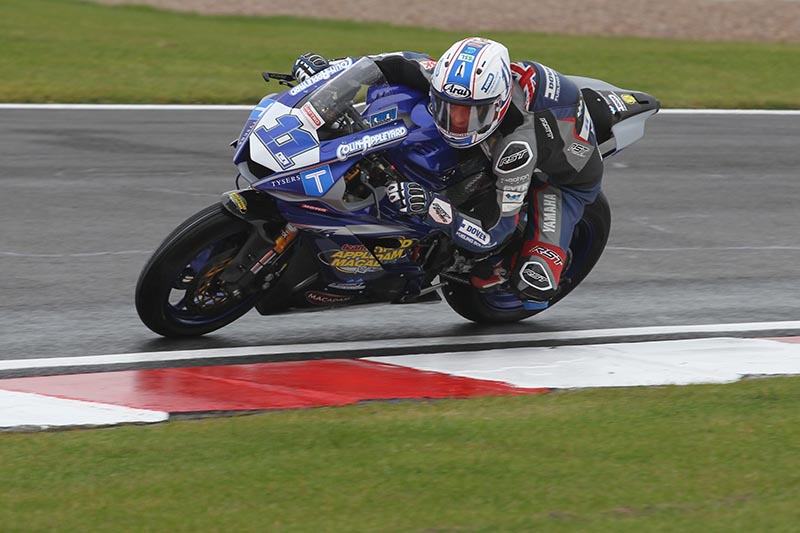 Rory suffered his first crash of the 2020 Quattro Plant British Supersport Championship season as he slid out of the lead in torrential conditions during this morning’s 12-lap Sprint race at Donington Park.

With Storm Alex forecast to come in and batter the penultimate race weekend of the year, qualifying was cancelled and the race moved to a 10:40 start, with the hope of avoiding the worst of the weather.

Having topped the timesheets in yesterday’s free practice, Rory started on pole and made a good start to pull away in the worsening conditions. Having pulled out a 3.6 second lead by the end of the first lap, the recently turned 19 year old led for the first three laps, but was flicked off his Tysers Yamaha YZF-R6 at the exit of Old Hairpin on the fourth lap.

In a race of attrition, only nine supersport class riders finished the race with James Westmoreland winning from James Rose and Bradley Perie. Despite failing to score, Rory retains the championship lead, albeit with a reduced gap of 65 points over Westmoreland.

“I’m irritated more than angry,” said Rory. “Conditions were tough. I had backed my pace off by about a second but I just lost the rear on the exit of Old Hairpin. I’m not hurt though, and we’ll go again tomorrow.”

Such was the severity of the conditions, the British Superbike race scheduled to start immediately after the Supersport Sprint was postponed. Tomorrow’s 18-lap Feature race is now scheduled to start earlier than usual, at 13:30, and although the weather forecast is better conditions are still expected to be wet.