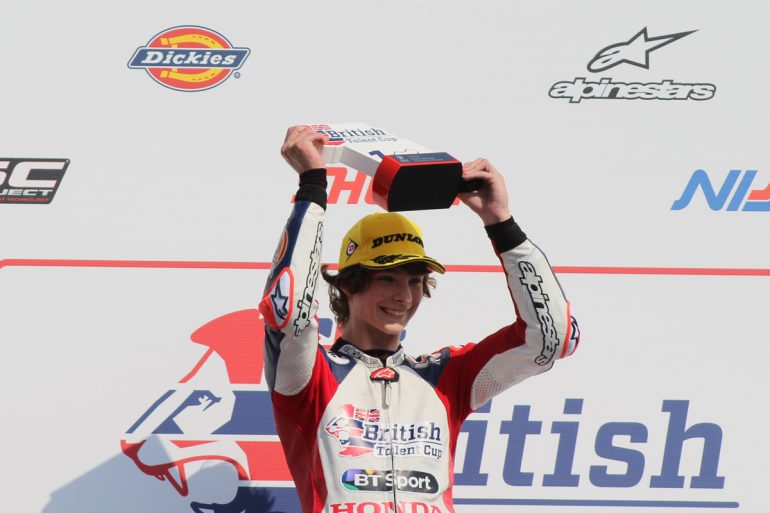 Rory Skinner gave a mature display to take the win in this weekend’s opening British Talent Cup race at Donington Park, leading 11 of the 15 laps and coming out on top in a tense battle four-way battle for victory.

Starting from fourth on the grid, the 16-year-old from Perth took the lead as the pack plunged into the Old Hairpin for the first time. With all riders on identical Honda NSF250R machines, Rory was unable to shake off the attentions of Max Cook and Thomas Strudwick, who both took spells at the front in the mid part of the race. A fourth rider, Fenton Seabright was able to join the group, but Rory rode with a calm head and was able to retake the lead through the fast left handed section leading up to McLean’s corner on lap 12. Despite coming under intense pressure, Skinner did not relinquish his lead, taking the win from Cook and Strudwick. The win sees Rory move up to second in the championship, 10 points behind round one winner Strudwick.

“It goes without saying that I’m really happy to have won,” said Rory. “I was happy with my consistency throughout practice and I wanted to get to the front and try and pull away. I could see from the pit board that the gap was coming down, so I was happy to sit behind them for a bit and see what they had. I was able to get past and up my pace in the closing laps. I did my fastest lap on the very last lap and overall I’m delighted with how it went. Thanks to all the BTC staff for preparing a great bike and my dad for giving me some great pit signals. I can’t wait for tomorrow’s race!”