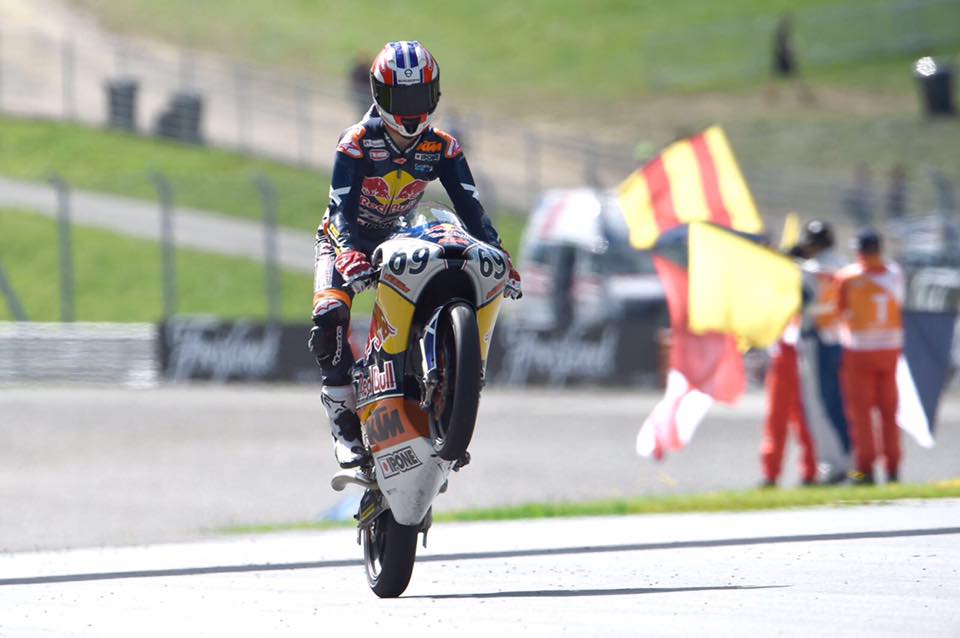 Perthshire rider Rory Skinner bounced back from an unlucky opening race at the Austrian round of the Red Bull MotoGP Rookies Cup this weekend to record a sensational fastest lap and a ninth place in Sunday’s 17 lapper against the world’s most promising teenage motorcycle racers.

The 15-year-old was an innocent victim in a spectacular first lap pileup during Saturday’s race but overcame the lost track time, not to mention a few aches and pains, to come home just over two seconds from the win at the Red Bull Ring the following day.

After a frustrating outing in the Czech Republic the previous weekend, Skinner bagged a confidence building third row start in Friday’s qualifying session. Despite having lasted less than two corners before being knocked off in Saturday’s race, the Brit remained full of confidence for Sunday’s outing and got his head down to work hard after making an average getaway at the start. Working through from outside the top 10, Rory twice set the fastest lap of the race, averaging over 96mph around the 2.7 mile circuit, to bridge the gap to the leading group. Unfortunately a small mistake two laps from home denied him an opportunity to fight for the podium positions, with ninth place not truly representing Rory’s outright pace on the championship’s fastest circuit.

Speaking after the races, Rory said: “My start wasn’t the best but I stayed calm because I knew that it’s a long race and it could well have been carnage in the first couple of laps. I felt really comfortable in my group and was able to put in consistent fast laps to catch the leading bunch. It was tough because a rider in front of me made an overtake that caused the group to be separated and then, with two laps to go, I ran a little wide and lost a second to the group. I got my head down and just missed out on eighth by 0.028 seconds, matching my best lap time on the very last lap.

“Overall there are a lot of positives to take from the weekend. I’ve had the pace to run at the front and have been confident throughout the weekend. After a difficult weekend in Brno, I feel that we really made some big steps and want to thank all of the Rookies Cup team and staff for their support over the weekend. We have almost a month now until our next race, at Misano, but before then I am looking forward to attending the British Grand Prix at Silverstone, in two weeks time.”

The next race in the 2017 Red Bull MotoGP Rookies Cup takes place alongside the San Marino Grand Prix at the Misano World Circuit on the weekend of 8-10 September.