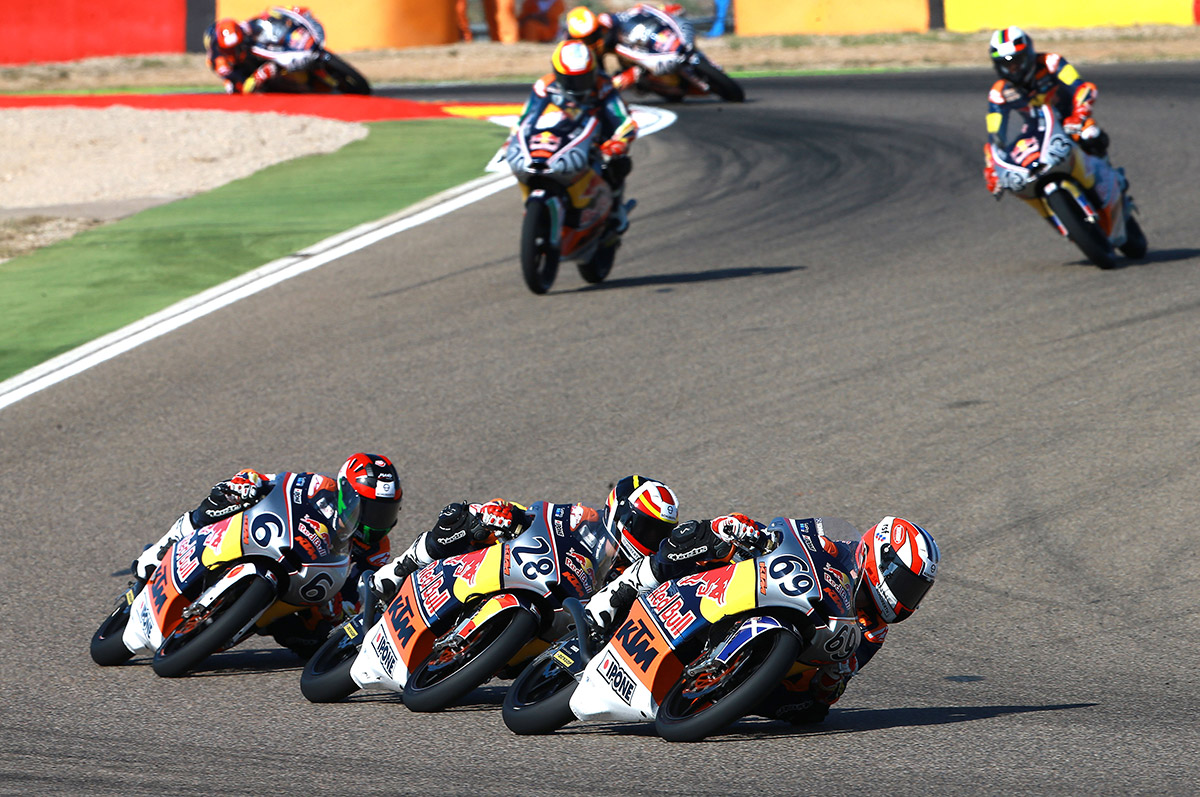 Young British motorcycle racer Rory Skinner completed his three-year spell in the prestigious Red Bull MotoGP Rookies Cup series with a pair of top 10 finishes, missing out on top three silverware by just over a tenth of a second in Sunday’s final 15 lap outing.

The Scot faced two tough races after qualifying 13th in a hotly contested qualifying session but showed his true potential as he battled through to join the leading group both times out.

Skinner was the fastest rider in the opening laps of Saturday’s race as he bridged the gap to the leading group, however a small mistake just before half distance saw him lose ground and the all important slipstream down the long back straight. The undulating Spanish circuit is characterised by its tight twists and turns, as well as a straight that sees the young competitors trying to squeeze every last ounce of speed from their machines. Without a large group of riders punching a hole in the air ahead of him, Rory found himself losing a staggering second a lap down the straight alone and although he tried hard to make the ground up through the infield sections he eventually came home in a lonely ninth place.

“We geared the bike for maximum speed in the slipstream, but without any riders in front of me I was unable to pull maximum rpm and lost time down the straight,” said Rory. “I was pushing pretty hard to try and catch back up to the leading group but in the end I made a couple of mistakes and ran wide and off the track at turn one.”

The Perth-based rider changed the gearing on his KTM RC250R for Sunday’s race, adopting a shorter final ratio to give punchier acceleration at the expense of some top speed down the long Aragon straight. The change significantly altered characteristic of his bike but was to prove successful, as it allowed Rory to race with the leading group for the entire race. He finally finished seventh but only narrowly missed out on second place, being one of seven riders covered by 0.3 seconds at the chequered flag.

“I had to relearn how to ride the bike,” explained Skinner. “The change affected the engine braking and that in turn meant that I struggled for front end grip. I kept fighting and was there or thereabouts throughout the race. I was happy with the way I was riding but in the end I just missed out on a podium.”

Skinner was selected to race in the Red Bull MotoGP Rookies Cup, as a 13-year-old, at the end of 2014. Having completed the maximum three years in the championship, the Aragon race marked his final outing in the series, in which he has scored a race win, pole position, podium finishes and fastest laps. “I really want to thank all of the Rookies staff for selecting me and for their support over the past three seasons. It has been an amazing experience,” he added.

Rory’s next outing is in two weeks time, when he is back at Aragon to compete in the Moto3 Junior World Championship series. Before then, he celebrates his 16th birthday on Wednesday, when he is due to undergo the compulsory basic training (CBT) required to allow him to ride a 50cc moped on the roads.