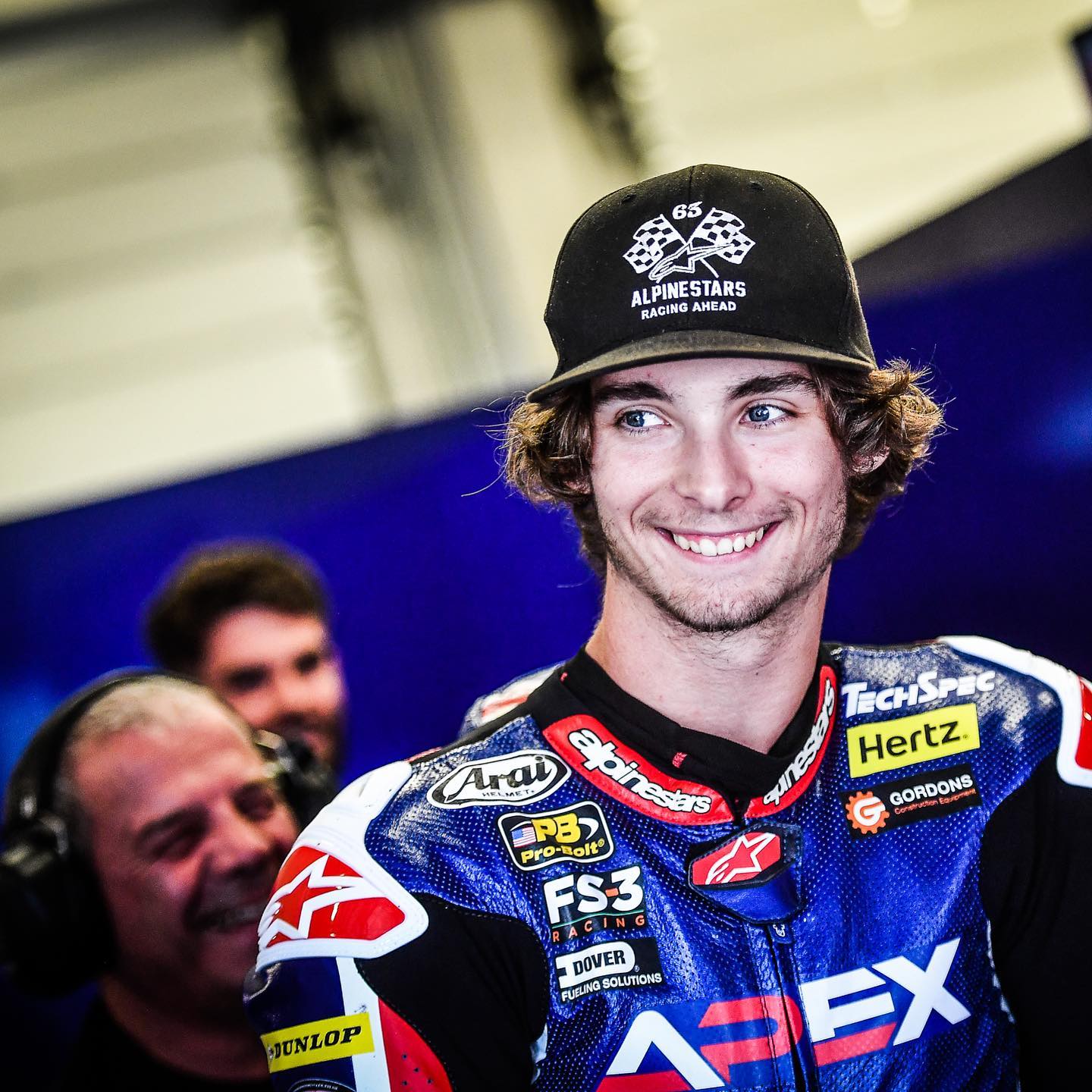 Rory Skinner will join the American Racing Team full-time in 2023, riding alongside Sean Dylan Kelly for his rookie season in the Moto2 world championship.

Rory joins the team from British Superbikes where he’s taken multiple podium finishes and sits eighth in the Championship after being sidelined due to injury for the last two rounds.

The Scottish rider is touted as one of the UK’s brightest young talents, having competed in Red Bull Rookies, British Talent Cup, and British Supersport where he became the series’ youngest ever champion.

Rory has already made two appearances in the Moto2 World Championship this season as the 21-year-old joined the team for Silverstone and Austria as a wildcard entry, clinching 21st in both rounds and giving him vital experience to face the challenge ahead.

Rory said: “I’m delighted to be joining American Racing for the next two seasons. Racing in the Grand Prix paddock is every rider’s dream, and opportunities like these don’t come along often, especially for British riders.

“American Racing feels like the perfect team to make my full-time Moto2 debut with. Eitan and John have worked with me for the past two seasons and right from the beginning, they knew where I wanted to be and have been true to their promise in supporting me in my ambitions. We’ve done two wildcards earlier this year, which confirmed that this is where I want to be, even though I am under no illusions as to just how competitive Moto2 is. I will be doing everything I can to repay the faith they’ve shown in me, and I also want to thank all the people who have supported me in the past four seasons in the Bennetts British Superbike Championship paddock. From my dad running me on a private Kawasaki in British Supersport to Robin and Doug for giving me the chance at Appleyard Macadam Racing, and of course my current FS-3 Racing team, I am very lucky to have worked with some amazing people who have helped me develop as both a person and a rider in what is a high-level championship.”

Avner Kass and Eitan Butbul, American Racing Team Owners, added: “We are very excited to announce that Rory Skinner will be joining us here at American Racing! After John Hopkins and Eitan started managing him over two years ago, this was always our intention, but due to unforeseen circumstances in the team, it’s happened slightly earlier than we expected. But as they say, ‘everything happens for a reason’.

“We are proud that we as a team, with our outstanding crew, are in a position where we’re not afraid to take potential ‘risks’ in bringing riders over from alternative championships – something less common in today’s Grand Prix climate – to ensure talent from elsewhere is not overlooked.

“In addition to this, we think it’s appropriate to announce here that along with our current Team/Academy/Management style programme, we’re planning to branch out and add an American Racing slot or two in the European Moto2 Championship. This will create another avenue and step in our effort to have American, and even young British racers, to further develop their skills and be competitive at a European level, in order to take their spot here at American Racing in the Moto2 World Championship when they’re ready.

“Lastly, we wanted to give thanks to Darren and Nigel from the FS-3 Racing team, who have supported Rory the last two years and gave him the option to have him ride with us this year in his two wildcard appearances.”

John Hopkins, American Racing Team Director, continued: “We’re really excited to be bringing Rory on board. He is an exceptional talent which we’ve known from the beginning of working with him. It’s very difficult these days to get people to see the talent of riders outside of the Grand Prix paddock, which is the main reason for the wildcards he did with the team earlier this year. He showed how exceptional he is with his speed having never been on the Moto2 bike before.

“It’s a strange set of circumstances of how it’s happened in that we were always wanting to get him a Moto2 ride somewhere in the series but with Cam making the choice to leave the championship, it’s opened up a spot here. So we’re really excited to bring him on board, we know it’ll be a difficult start but we’re all up for the challenge. Rory’s mental approach is what proves to me that he will be competitive and with that, we’ll be ensuring that he has every tool to be able to carry that through.

“Most importantly I want to state how that when Eitan, Avner and I started this project – the team, academy and our management business – our whole goal was to bring riders up that we’ve managed and played a role in their career and used the team basically as the perfect platform to springboard them up into MotoGP. Now that we have two riders who we personally manage and have done so for a few years riding for the team next year in Sean and Rory, perfectly shows that we put our words into action. These are riders that otherwise would likely not have had opportunities in Moto2, given the current circumstances within the sport and rider market. We’re really proud of having built this system and we’re looking forward to continue showing that you can bring riders from other championships onto the world stage, make them competitive and help them reach their dreams – not only on the team’s side but the management side, too.”