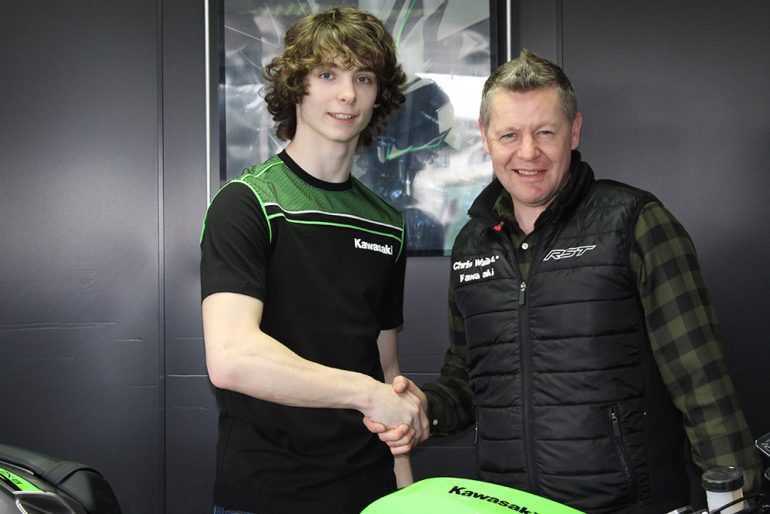 Walker’s Grantham based dealership, Chris Walker Kawasaki, will provide a new-for-2019 ZX-6R for Skinner’s privately run squad, as the 17-year-old from Perth prepares for his first full season in the British championships.

“I’m really delighted to have the support of Chris for my debut supersport season,” said Rory. “I raced a ZX-6R in the Scottish championships and some national superstock races last year, so I am happy to stay in the Kawasaki family and know that the characteristics of the bike suit me. With some of my other plans falling through, we found our options have been quite limited, so having the support of Chris and Kawasaki has really been a saviour for my season. Chris is a legend among British superbike fans and the respect he has within the paddock is immense. I’m very grateful to him for providing a bike and for giving me the benefit of his vast experience.”

Skinner will continue to run under the number 11 he used in 2018, and his family run team are now busily preparing the ZX-6R ahead of the official pre-season test, which takes place at Silverstone on April 9.

Rory continued: “I’m also appreciative of my family for their support in putting the team together. We’re still searching for a title sponsor to come in and take the pressure off us, but I want to thank the many individuals and companies who have helped us get on the grid through their cash sponsorships and product support. We’ve still got a lot of work to do, and not a lot of time to do it in, but we should be ready in time for Silverstone.”

Chris Walker added: “I’ve followed Rory’s career for a few years now and have been impressed not only with what he achieved in the British Talent Cup last year, but also in the few rounds he did on the ZX-6R in National Superstock 600. In many ways that actually stood out more to me, because to jump on one of these bikes and be right up there in the wet and dry showed great ability.

“I actually first met Rory many years ago. His dad, Mike, came to the Chris Walker Race School and was very fast, so when his son started racing I kept my eye on him. It would have been a tragedy if a rider of Rory’s talent was without a ride this year and I am delighted to be in a position, with Kawasaki UK’s support, to help him out. I’ve been in and around the British championship paddock for some 25 years now and hopefully my experience and contacts can be of help to Rory. He has a lot of potential and it will be good if we can even play a small part in helping him reach the top of the sport.”

Companies wishing to promote their brand through Rory’s 2019 campaign can get in touch through our Contact page, while a GoFundMe page has been set up for any individuals wishing to contribute to Rory’s racing fund and can be found here.