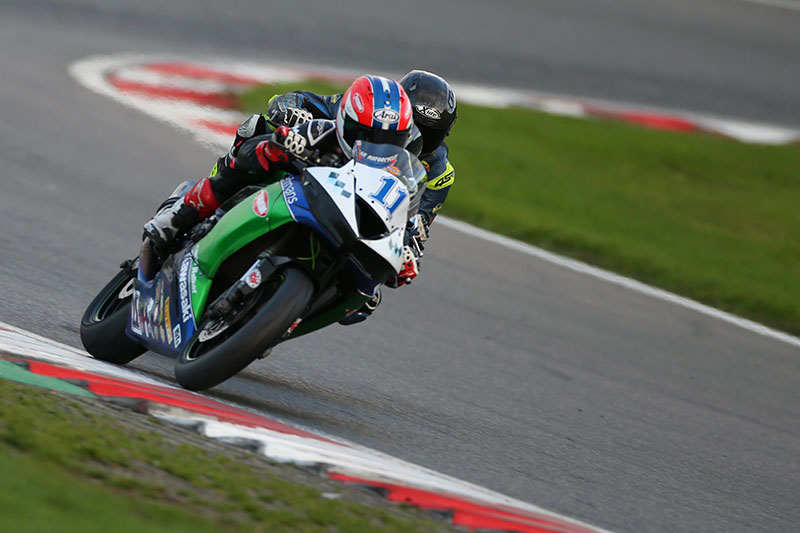 Rory Skinner ended his debut season in the Dickies British Supersport Championship on a high at Brands Hatch this weekend, narrowly missing out on a podium finish in two thrilling races with a fifth and a fourth place finish. The results see the 18-year-old Perth rider consolidate seventh overall in the points standings, ending the year as top rookie and the leading Kawasaki rider in the championship. The youngster’s performances contributed to the privateer Watermans Team MSR squad finishing as the top Kawasaki squad in the team championship, in eighth overall.

Saturday saw Rory score his second successive front row start and he played a leading role in a combative 12-lap Sprint race. The former Red Bull MotoGP Rookies Cup race winner dropped to sixth on the first lap but soon regained his composure and was locked in a race long battle for the final podium position, eventually finishing fifth in the supersport class after a red flag on the final lap.

Rory’s best lap time from the Sprint race secured second on the grid for Sunday’s 18-lap Feature race and, once again, Rory found himself in the thick of things. In a repeat of the Donington Park Feature race two weeks earlier, Skinner found himself battling for third with James Westmoreland and Tom Oliver, behind the dominant Integro Yamahas of Jack Kennedy and Brad Jones. Double champion Kennedy took the win, his 20th of the season, while championship runner up Jones took his 23rd podium of the year.

Behind them, Rory passed Oliver with a decisive last lap move and finished less than two tenths of a second behind veteran Westmoreland at the flag to take his third fourth place finish of the season. Despite failing to score in one race at Donington Park a fortnight ago, Rory’s late season form has seen him outscore all but the dominant Kennedy and Jones in the last three rounds of the championship, when the team introduced an updated engine specification.

Speaking after the race, Rory said: “Overall I’m pretty happy with how this weekend has gone, especially considering we didn’t have the best round back at Brands in June. We ended up being fast again all weekend and I felt strong throughout the whole race and able to make moves when I needed to. P4 is a great way to end the season, especially when we consider where we came from at the beginning of the year. We’ve improved the bike a lot since we started out with little more than a stock bike at the opening rounds. Today we were fastest through the speed traps and just 0.5 seconds off Jack’s best lap, which is a testament to the work carried out by my dad and Stuart Young Tuning in developing the bike.”

“It has been a tough season for us, but a good one too,” Rory added. “Running our own team has put a lot of pressure on us and I want to thank everyone who has helped us this year. Geoff Crust from Team WD40 has been a valuable source of information for the second half of the season and that has been a factor in helping us improve our results.

“I’m so happy to be joining the Appleyard Macadam team for 2020. Their record speaks for itself, but more than that they have a structure and a way of working that can help me develop as a rider. Being a privateer puts a lot of pressure on the family, but being part of a top team allows me to focus on developing as a rider.

“This has been my first season on a 600 and I know that I still have a lot to learn. From my very first meeting with Robin Appleyard I had a good feeling and I’m honoured that they’ve chosen to work with me. The season has just finished but I can’t wait to get started!”