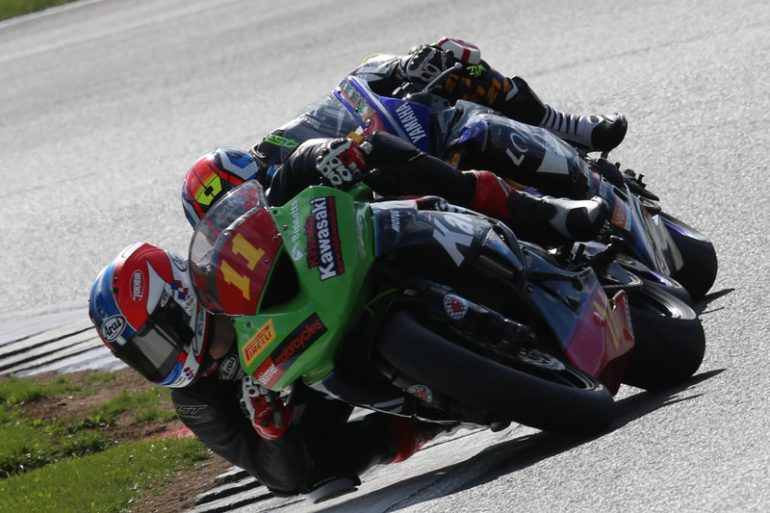 It was a disappointing end to an otherwise immaculate performance from Rory Skinner at the Silverstone round of the Pirelli National Superstock 600 championship, as the 16-year-old Perth racer crashed out of the lead in only second appearance in the championship.

Having set pole position in Saturday’s 25-minute qualifying session, the British Talent Cup competitor pulled away from the field by almost a second a lap, bringing champion elect Ryan Vickers along with him.

The pair had a near nine second lead when Rory lost the front end of his Bennetts Tokheim Kirkcaldy Kawasaki going into the fast Copse corner for the tenth time. Vickers went on to win the 22-lap race and secure the 2018 championship.

“It’s a disappointing way to end but there are plenty of positives we can take from the race,” said Rory. “I’d been fastest in every session this weekend, except in FP2 when we had a fuel pump problem, and I’ve led from the front against the new champion.

“The bike felt really good and I was feeling like I could build a gap when I crashed. I’d just got off the brakes when I lost the front end and went down. It was quite windy, so maybe that played a part, but I’ll watch the TV coverage and see what we can learn from that. It’s a shame but I’m fine and hopefully the bike is not too badly damaged and we can be back on the grid at Oulton Park next weekend.”

Rory and the Bennetts Tokheim Kirkcaldy Kawasaki squad are scheduled to race at the penultimate round of the championship at Cheshire’s Oulton Park next Sunday, before returning to the British Talent Cup at Assen on the weekend of 29-30 September.