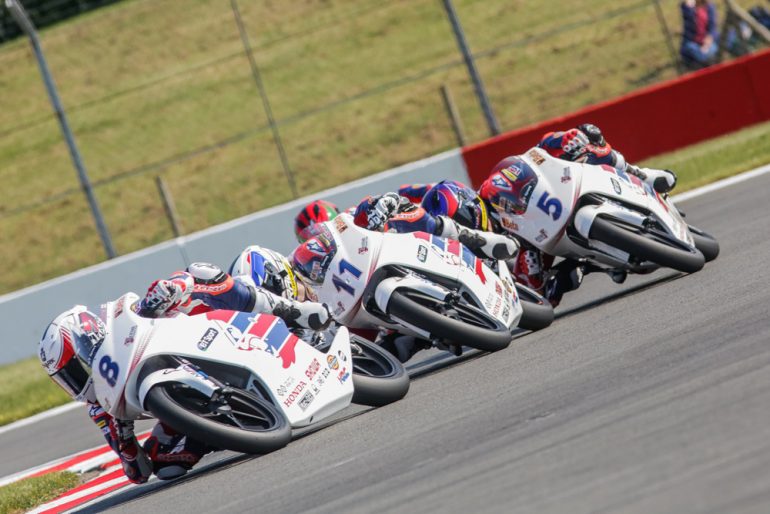 Having won Saturday’s opener, Rory once again grabbed an early lead in a race that was a virtual replay of the previous day’s 15-lapper. As had been the case 24 hours earlier, the 16-year-old from Perth battled it out with Max Cook and Thomas Strudwick, with the less than one second covering the three riders for the entire race. In a tense and exciting race full of clean overtakes from all three riders, Skinner made his move on the final lap and held the lead going into the final corner, where Cook squeezed up the inside. Rory tried to hold his line but was forced to give second best when the rear started to slide and he was forced to close the throttle momentarily, crossing the line 0.409 seconds behind his rival to take the 20 points for second place.

With 45 points for a win and a second place at Donington, Rory moves into second in the championship, on 51 points. He is just six points behind Strudwick with two of the six race meetings completed.

“We’ve had two really exciting races this weekend and it’s great to come away with a win and a second,” said Rory. “That said, I am a little bit disappointed to come second because I felt that if I led through the Foggy Esses then I could take the win. It went according to plan but I made a tiny mistake coming out of the Melbourne hairpin and that allowed Max to get underneath me going into the last corner. I tried everything I could and got on the throttle early but the back end went and put me out of the seat. Still, 20 points for second is good for the championship and I’m looking forward to the next round at Snetterton, which is more or less a new circuit for me as my only previous experience there was on the short circuit four years ago.”

The next round of the British Talent Cup takes place alongside the Bennetts British Superbike Championship, at the Snetterton 300 circuit in Norfolk, with another two races across the weekend of 16-17 June.