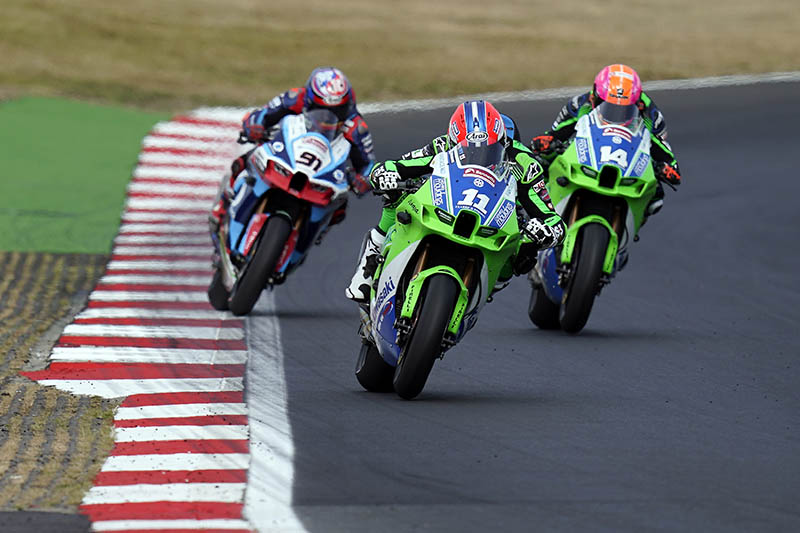 Rory Skinner showed plenty of fighting spirit to maintain his fourth place in the 2022 Bennetts British Superbike Championship standings, scoring a trio of top 10 finishes at Brands Hatch on his most challenging weekend of the season so far.

The 20-year-old former British Supersport Champion struggled to find a perfect race set-up on his Cheshire Mouldings FS-3 Racing Kawasaki ZX-10RR in the high temperatures and, despite showing plenty of speed throughout the weekend, was unable to quite match the podium runners over a race distance. In spite of the challenges, Rory maintains fourth place overall in the fiercely contested championship, with five rounds completed.

Friday saw rain showers restrict running time during the two 40 minute free practice sessions, with Rory ending the day 10th but buoyed by setting the fastest ‘ideal’ time based on his best times through each of the four sectors of the undulating 2.43-mile Kent circuit.

Saturday saw the young Scot qualify seventh, despite a mid-session excursion through the gravel at Paddock Hill Bend, and a strong opening half of the first lap of the afternoon’s 15-lap eBay sprint race saw his lime green Kawasaki scythe through to fifth behind the Yamahas of Jason O’Halloran, Tarran Mackenzie, Brad Ray and Kyle Ryde. Ducati pairing Tommy Bridewell and former champion Josh Brookes relegated Rory back two more places, with Skinner heading home Leon Haslam and FS-3 team-mate Lee Jackson in an all-Kawasaki battle for seventh.

Sunday saw some set-up changes to the ZX-10RR for the 20-lap main races and Rory put in another heroic first lap to move from ninth on the grid to fifth, behind the Yamaha runners, once again. A move past Ryde saw Rory run as high as fourth but by half distance he was unable to maintain the pace of the podium challengers. Despite some grip issues, Rory was able to put in a strong performance, only just missing out on fifth to 2018 champion Haslam by 0.006 second.

With a sixth place grid slot and further set-up tweaks for the weekend’s third and final race, hopes were high for a stronger finish. Unfortunately Rory found himself boxed in on the opening lap, dropping down to seventh as they crossed the line for the first time, which was further compounded when he lost further places after running wide at Graham Hill Bend on lap two.

Despite the setback, Rory put in a strong recovery ride to charge through from 13th to ninth at the flag – matching the leaders for mid-race pace and overcoming Jackson and Christian Iddon in the closing laps to take a third points scoring finish of the weekend.

The Brands Hatch results see Rory consolidate his place in the all-important top eight ‘Showdown’ places, which will be determined after round eight of the series, maintaining fourth in the points standings and reducing the gap to third by 13 points on a weekend where he was unable to get an ideal feeling with his bike.

“It was a tough weekend really,” said Rory. “We tend to need good mechanical grip to make a lap time and we really struggled in the high temperatures. We were a bit on the back foot all weekend but there are still lots of real positives to take from it.

“This was the first time I’ve ridden since having arm pump surgery a few weeks ago and that would appear to have been a success, as I had no issues whatsoever. It was also good having Hopper (John Hopkins, Personal Manager) over and helping in the garage this weekend. I enjoyed working with him in person and he gave good input and advice. At the end of the day, we’re fourth in the championship and it shows how strong our season has been so far when we’re going away with three top tens and feeling like it’s been a tough weekend.”

Rory now has a weekend off before a hectic August schedule which will see him make his world championship debut at the British Moto2 Grand Prix as a wildcard rider for the American Racing Team, before resuming BSB duties at the superfast Thruxton track ahead of a second Moto2 outing at the Red Bull Ring in Austria.