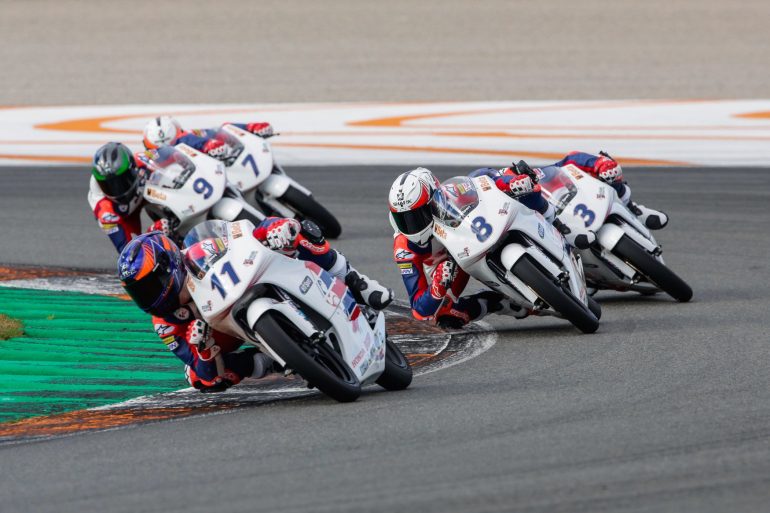 The 16-year-old from Perth is one of 23 young riders selected for the inaugural British Talent Cup season, a new initiative from MotoGP organisers Dorna Sports, which is designed to provide a pathway to world championship racing for the country’s most promising racers. The series takes place over 12 races, with all riders mounted on identical Honda NSF250R motorcycles.

“It’s always great to get back out on the bike and I was really pleased with how the test went,” said Rory. “The main thing was to get used to the bike, as I haven’t ridden a standard Honda before, but I got on with it really well. Physically, it’s very similar to my own two-stroke Honda RS125R and I enjoyed riding it. The conditions were very windy, but mostly dry, so we got lots of track time. The structure is really good and similar to the Red Bull MotoGP Rookies Cup that I have been riding in for the past three years, so I felt at home straight away.

“It’s a good feeling to be fastest, but more importantly I was happy with my consistency and because I was able to set my best lap times on my own and not following other riders. I’m looking forward to the season ahead and can’t wait to get to Donington Park for the first round.”

The first round of the British Talent Cup takes place at the famous Donington Park circuit in Leicestershire on the weekend of April 1-2, a circuit that holds happy memories for Rory.

“I haven’t raced at Donington Park for three seasons, but it was always one of my favourites,” added Rory. “I had my first race on a full sized bike there at the end of 2013, when I won on my first weekend in the Aprilia Superteen Challenge, and I tied up the Superteens there the following season, so it holds good memories for me.  I am looking forward to going back and hopefully starting the season with a good result.”