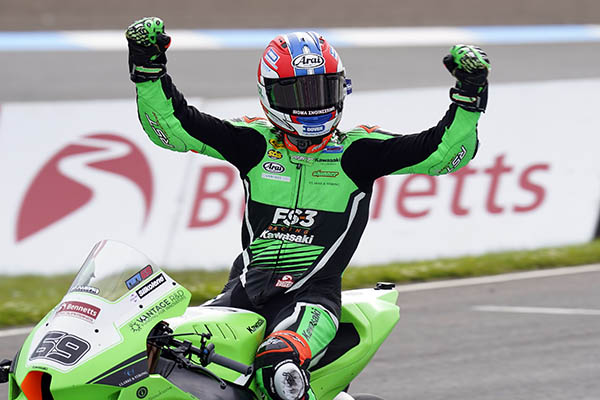 The 19-year-old from nearby Perth had already impressed with fifth place on Saturday’s 20-lap sprint race, and set a lap time good enough to secure a front row start in Sunday’s first 30-lap outing.

From the flag, the reigning British Supersport champion ran comfortably in the leading group, moving into third on lap 18 and second behind eventual winner Danny Buchan two laps later.

As well as his second place, Skinner set the fastest lap of the race giving him pole position for the weekend’s final race.

After losing some ground off the line, Skinner retook the lead as he entered the hairpin for the first time – leading the first 23 laps before being overhauled by Buchan. Unfortunately there would be no opportunity to challenge the race one winner as the red flag came out due to an accident involving another rider on the following lap. Despite narrowly missing out, Rory was delighted with his weekend’s work – which puts him to fifth place in the championship.

“To be honest, I was already really happy after Saturday’s race,” he said. “As a rookie, I go into each race with no pressure and to get a podium in just my second weekend on a superbike surpassed any expectations we had coming here. It was a shame we had a red flag in the final race, but I am delighted with another second place. It’s also a shame there was a limit of 1000 fans here but, even so, it was great to be racing in front of my home crowd, and to have my friends and family here.”

Rory is set to undergo surgery tomorrow, to rectify the arm pump issues which affected his debut at Oulton Park two weeks ago, but expects to be fully fit for the next round, which takes place at Brands Hatch in Kent on the weekend of 23-25 July.