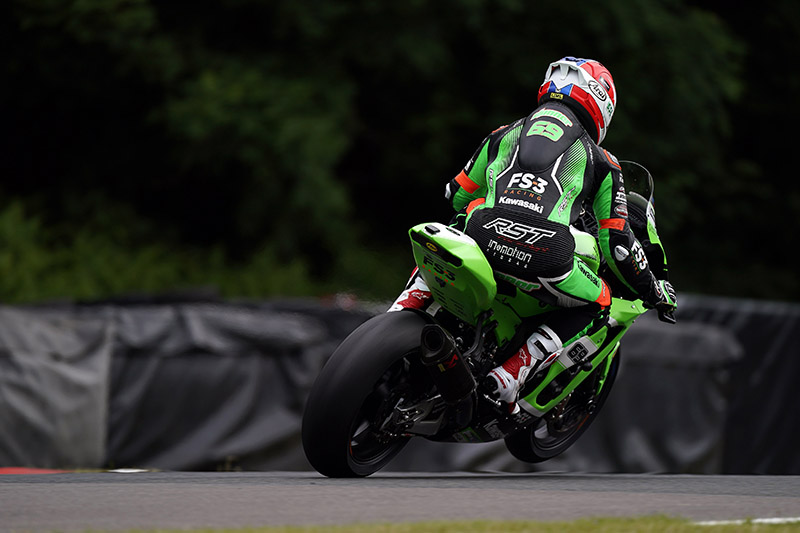 Nineteen-year-old British Supersport Champion Rory Skinner gained a huge amount of experience and scored points in all three races on his debut weekend in the Bennetts British Superbike Championship at Oulton Park.

The undulating Cheshire circuit is the most demanding race track in the country, but the Perth teenager put in a mature performance to finish all three outings on the 200+bhp FS-3 Racing Kawasaki ZX-10RR and leave with 10 championship points to his credit.

After qualifying 16th for his debut race, the superbike rookie posted a 13th place finish in the 14-lap sprint race and set fastest lap that put him eighth on the grid for Sunday’s first 18-lapper, where he ran as high as sixth before finishing 12th. Another 13th place in the final 18-lap outing saw the young Scot leave Oulton Park 14th in the points standings.

Speaking after the races, Rory commented: “The British Superbike Championship is the toughest domestic series in the world and it’s been a real baptism of fire here at Oulton Park. A realistic aim was to get some points on my debut, so to get two 13th places and a 12th has beaten the targets I set coming here and I am more than happy. I was blown away to start P8 in race two, and I think that the team are pretty happy with how things have gone as well. I really have to thank them for believing in me. They never put me under any pressure and I was able to spend this weekend getting in more laps and continuing to get used to the bike.”

Knockhill provides the venue for the next round of the 2021 BSB series, in two weeks’ time, and Rory is excited to be racing at his local circuit. He added: “One of the few disappointments from last season was that we didn’t get the chance to race at Knockhill and now I can’t wait to get up there on the superbike. It’s a real shame that the Covid regulations mean that there will only be 1000 fans in attendance but I know that I will still have a lot of support. It’s a track I know and love and we were able to spend two days testing there at the beginning of the month, which means I’ll go there with a good base setting and looking to continue building on the experience we gained at Oulton Park this weekend.”