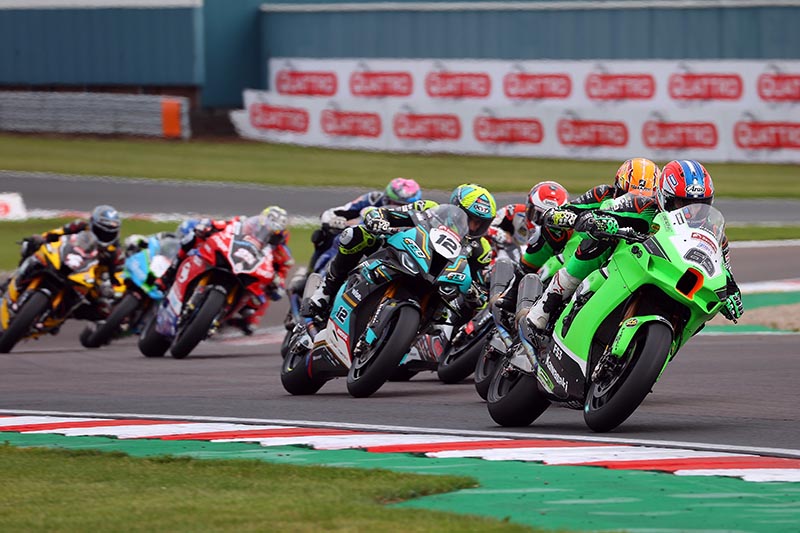 The 19-year-old British Supersport Champion showed plenty of pace throughout practice on his FS-3 Racing Kawasaki ZX-10RR, going straight through to Saturday’s Superpicks 12 qualifying session where he dipped under the lap record to take 13th on the grid for the afternoon’s 20-lap Sprint race.

A heavy rain shower before the race meant that the race would start on a drying track, but with a narrow racing line all riders took to the grid on dry weather tyres. Starting from the fifth row of the grid, the young Scot held his position in the opening lap only to run through the gravel at the start of lap two, losing 14 seconds and putting him to the back of the field.

A short spell under the safety car allowed Skinner to catch the pack and he was able to work his way through to cross the line in 17th place, just over two seconds from 12th.

After setting the sixth fastest time in Sunday morning warm-up, hopes were high for the afternoon’s two full length races. A blinding start and first lap saw Rory move from 15th on the grid to eighth at the end of the first lap, however some typically tight racing saw the Kawasaki rider bumped back to 12th by lap 10. Rory recovered and crossed the line in 10th, however a two-second penalty for cutting the chicane while involved in a fierce battle moved him back to 14th place after a late safety car period saw his advantage over the riders behind cancelled out.

Rory was one of a number of riders involved in incidents during the frantic race and he was penalised three places on the grid for race three after accidentally colliding with Glenn Irwin, an incident which saw the Honda rider crash.

For the third race weekend in a row, the final race was preceded by a rain shower – once again leading to a selection of different tyre choices on the grid. In the end, Rory and his FS-3 Racing team chose a relatively conservative wet weather front tyre, with an intermediate rear. The rookie was able to make good progress in the opening laps, running as high as sixth, but with the track drying and no more rain he was overtaken by riders running intermediate front tyres, slipping back to 11th at the flag.

“Everyone was riding so aggressively and that’s probably the craziest weekend of racing I’ve ever been involved in,” said Rory. “I made a few mistakes but overall I am happy and there are a lot of positives to take from the weekend. I was a tenth under the lap record in qualifying and I felt good on the track. Race one, I went into turn one really hot and unfortunately so had the rider in front of me – so I ended up having to take avoiding action through the gravel and rejoin at the back of the field. In race two I made a really good start and was involved in a big battle. I ended up running across the chicane after another rider came in hot underneath me, which cost me three places and gave me a two second penalty, and I ended up running through the gravel again after colliding with Glenn, which I apologised to him for afterwards. It’s a shame we had rain before the final race again. In the end the guys on intermediates had more pace but I was competitive with the guys who were on the same tyres as me.”

Despite a relatively low points haul, Skinner remains in the top 10 of the championship in his debut season – sitting in ninth place, 12 points from a top eight Showdown place, ahead of next weekend’s round at Lincolnshire’s traditional Cadwell Park circuit.

“Cadwell Park’s not a track I know very well but I enjoy riding it and am looking forward to next weekend,” he added. “I’ve only raced there once before on a big bike, in Supersport in 2019, but I’ve done a few track days on my practice bike and we have some testing on Thursday night, so hopefully that will help me get up to speed quickly.”