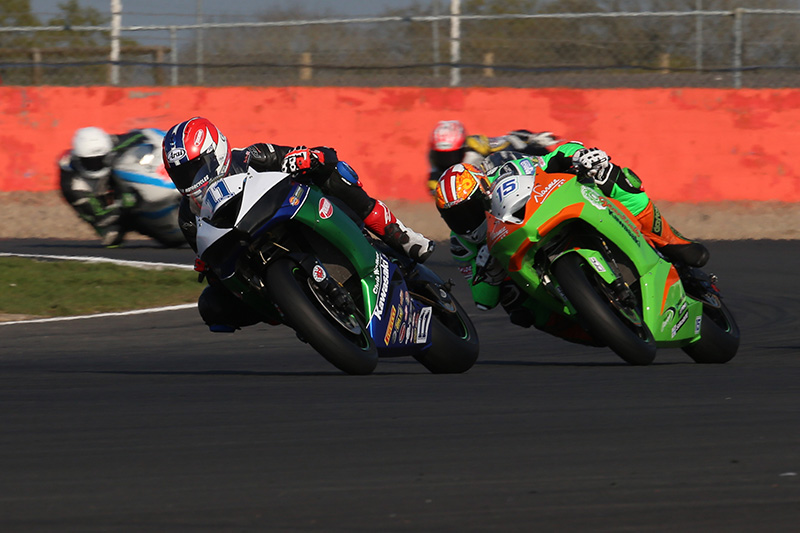 Team MSR, the family run privateer team set up for British Talent Cup champion Rory Skinner, had a baptism of fire in its Dickies British Supersport championship debut but made good progress as the 17-year-old gave another gutsy performance at the iconic Silverstone circuit.

Skinner and his rookie team thought they had repeated their result from Saturday’s Sprint race, where they finished ninth and the top Kawasaki runner, but were excluded from the results when the newly built ZX-6R was found to be slightly underweight in a post-race technical check.

Starting 12thin class on the grid for Sunday’s 26-lap race, the young Scot made a good start to make up some places in the opening laps, before riding his heart out to run with many more experienced runners. Rory again crossed the line ninth in class but scored no points as his machine was less than 2kg under the 161kg class limit.

“It was an error on our behalf,” said Mike Skinner, MSR team owner. “We only just finished building the bike at Silverstone on Thursday. We changed a few components, including fasteners and the battery, for lightweight racing items and we made a miscalculation. It’s disappointing for Rory as he rode so well, but we will learn from this and make sure it doesn’t happen again.

“This is our first meeting as a team in this class and it’s such a shame for Rory to be excluded as we made so much progress over the weekend. This was our first outing with the new ZX-6R and we knew that we would have to treat this round as a test session. Rory did a great job giving feedback on the bike and we made progress in every session. We know where we stand now and have a clear direction for the bike development. Our main priority is to find more power with a full supersport spec engine and we’ll be testing at Oulton Park on Thursday, where we’ll be running a Motec dashboard, which will give us datalogging for the first time.”

Rory added: “I’m gutted to lose the ninth place as I rode so hard out there today, but overall we’ve had a good weekend. We’ve done a good job over all the sessions and the progress we’ve made with the chassis from Friday morning to where we are now is all positive. It was a tough race out there and we had some good battles. Oulton Park is up next and we rode there on the Superstock 600 last year, so hopefully we can continue our progress and get ourselves a little bit closer to the leading group.”