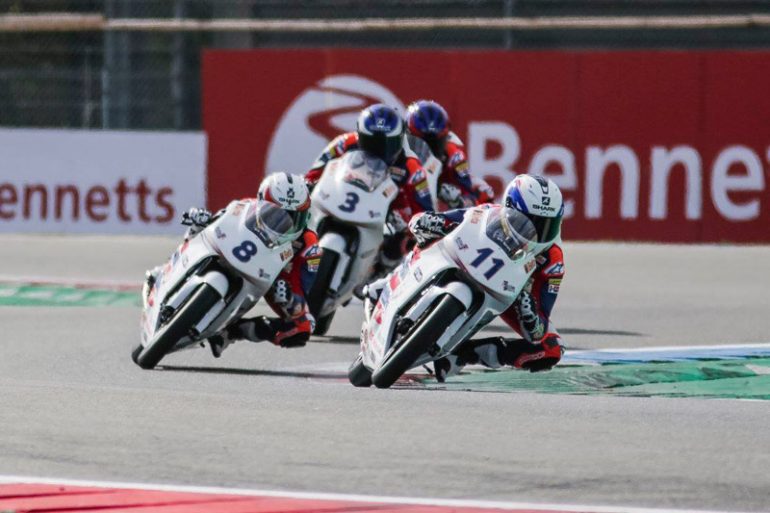 Just six days after breaking his foot and lower leg, 17-year-old Scottish racer Rory Skinner was back on top form, taking pole position and a race win at the Assen round of the British Talent Cup, to move back to the top of the points standings in the MotoGP feeder class.

Having crashed into the back of another rider in a Scottish championship meeting at the East Fortune Raceway last weekend, Rory’s participation at the classic Dutch circuit was in doubt right up to the start of the race. With the prestigious championship at stake, the Perth-based racer took the decision to take part in Friday’s practice sessions with a view to racing. Despite massive pain from the injured foot, Rory was able to set the fastest time in Saturday’s qualifying session to take pole position for the 16-lap race.

From the start, Rory was able to stretch a small advantage over title rivals Max Cook and Thomas Strudwick, but with the flowing nature of Assen making it almost impossible to make a breakaway, the Scot found himself engaged in a four way battle for the win, with Storm Stacey joining the lead group in the closing stages of the race. 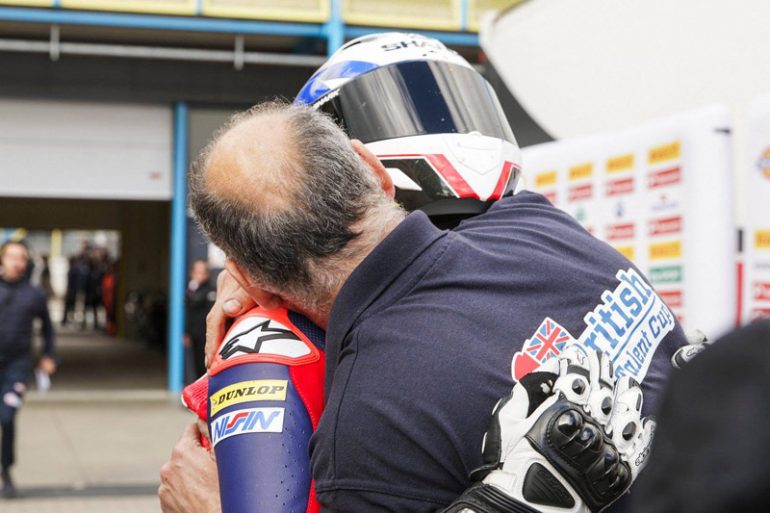 With a strong last lap, Rory was able to see off the attentions of Stacey to take his fourth British Talent Cup win of the season and an eight point championship lead over Strudwick, who missed out on the final podium place to Cook.

“That was tough but there was no way I am going to let this opportunity slip,” said Rory. “I went for a CT scan on Tuesday and they identified fractures in my foot and lower fibula, but not racing here wasn’t really an option when there’s a championship at stake. If I didn’t race here, I wouldn’t be within grasp of the title at the last round in Valencia.

“I came with an open mind and just wanted to do my best. I’ve just got to get on with it and take some paracetamol. They don’t really do much but they are the only painkillers we are allowed to take!

“At the start I wanted to try and make a break but that wasn’t possible. I was in quite a bit of pain but I felt pretty comfortable with the pace in our group of four. It was fun to have a four-way battle for the lead, which is something we haven’t really had this year. I was able to pull out a small gap on the last lap and I’m delighted to get the win and to lead the championship, and it feels more special in the circumstances. To say that I am pretty sore now is an understatement, and we’ve got to do it all again tomorrow! As always, my mum and dad have been very supportive, as are the British Talent Cup staff and the BSB medical team, who are looking me with regular physio sessions.”

“He is simply stronger than the others at the moment.  He feels strong on this track and pushed hard on the first laps and waited for a little bit to see what happened with his leg. On the last lap he pushed and made a little gap that was good enough for him (to take the win).”

This weekend’s second British Talent Cup race, which is held alongside the Bennetts British Superbike Championship, takes place at 10.40 UK time and can be seen live on the British Talent Cup YouTube channel: https://www.youtube.com/watch?v=B20d8wjlc40