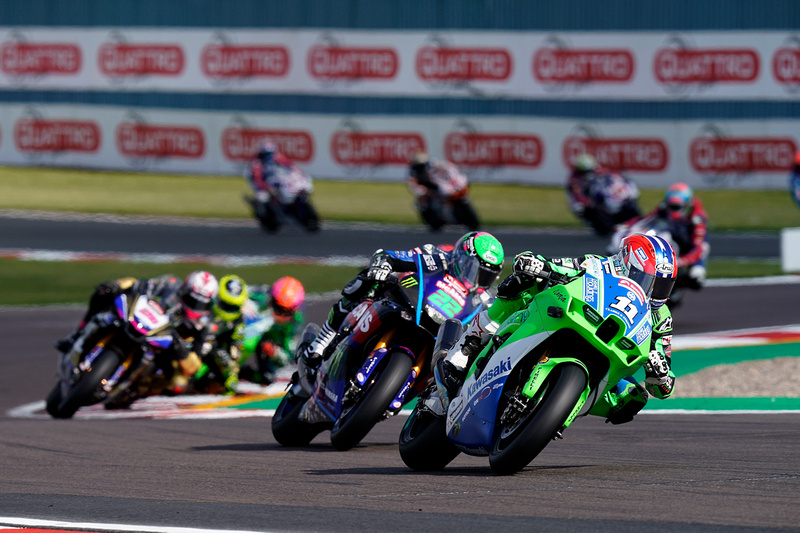 The 20-year-old from Perth took his Cheshire Mouldings FS-3 Kawasaki ZX-10RR to an excellent fourth place in qualifying and charged around the pack with a sensational first turn to lead the field in Saturday’s eBay Sprint race.

Unfortunately a broken bracket meant that the 2020 British Supersport Champion spent almost the entire race without his thumb operated rear brake, but he was able to ride maturely to bring his machine home to a damage limiting seventh place finish.

Sunday morning saw Skinner second fastest in warm up, but a big crash towards the end of the session meant that the FS-3 Racing squad needed to completely rebuild the ZX-10RR for the afternoon’s racing, which saw a battered Rory in the thick of the battle for fourth – finally coming home eighth at the end of the 26 lap race.

Starting from eighth for the afternoon’s final outing, based on his best lap time from race two, Skinner made another lightning start to make up four places on the opening lap before moving through to second as they crossed the stripe for a second time. The superbike sophomore battled for the podium for much of the race, making a pass on Kyle Ryde at the final corner to take his best result of the weekend with a fine fourth place. The result sees him leave the Leicestershire circuit fifth in the standings, 14 points off second and inside the all-important top eight positions which determine which riders go into championship deciding ‘Showdown’ places.

“It’s been a bit of a tough weekend at Donington,” Rory said after the races. “We had an off in the morning and my team worked really hard to get the bike totally built from scratch, the only thing that they carried over was the engine. I have to thank them for that and I am grateful to have such a great team around me. I suffered a lot from arm pump in race two. I was in a group and the rhythm wasn’t quite how I would normally ride a race, but for race three I was able to grit my teeth and the pace suited me a bit better and the arm pump wasn’t as bad. I’m over the moon with fourth. It has been a real rollercoaster of a weekend. I had to dig deep and we’ve ended what was a tough weekend with what feels like a win. I am looking forward to Knockhill, which is one of my favourite tracks. It’s only 30 minutes from home and I can’t wait to ride in front of the Scottish crowd.”

The championship now takes a four week break ahead of round four, which takes place at Rory’s local Knockhill circuit, although Skinner and the Cheshire Mouldings FS-3 Kawasaki team will be back on track with a two-day test at the Fife venue in early June.