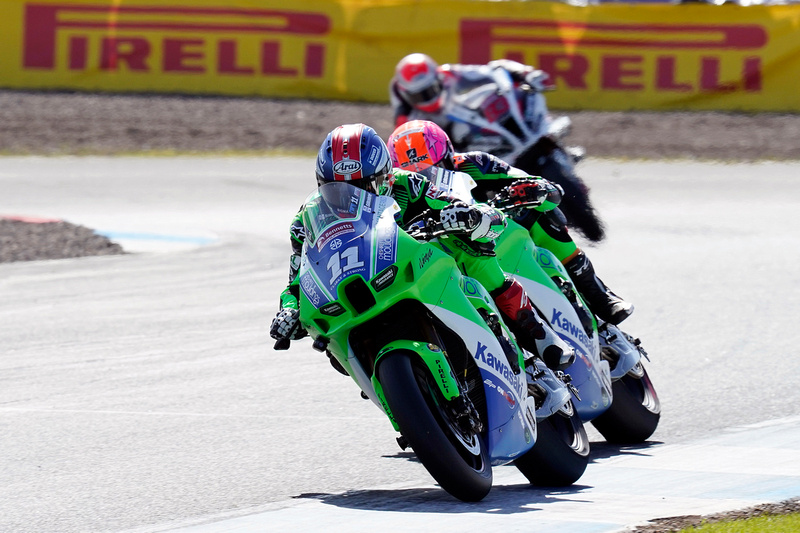 It was a weekend of highs and lows for Rory Skinner at his home round of the Bennetts British Superbike Championship, with a trio of races which saw him smash the lap record and take a pair of podium finishes – before crashing out of the lead in the weekend’s final race.

Having finished third in Saturday’s blustery eBay Sprint race, the 20-year-old from Perth was able to make some small adjustments to his Cheshire Mouldings FS-3 Racing Kawasaki ZX-10RR to top Sunday’s morning warm up session.

The former British Talent Cup champion made another lightning start in the afternoon’s opening race, taking advantage of the calmer conditions to obliterate the lap record on lap two and stretch out the lead over championship leader Bradley Ray.

The safety car was deployed on lap nine to clear up debris at the hairpin, in turn letting the field bunch up behind the leader. Cheered on by the large partisan local crowd, Rory continued to lead through to lap 26 – when Jason O’Halloran edged past the retro liveried Kawasaki up the main straight. Skinner and his team-mate Lee Jackson then traded positions in the closing laps, allowing O’Halloran to make good his escape. Jacko secured the second step of the rostrum with a final move at the chicane, with the duo giving the FS-3 Racing squad their first ever double podium finish.

Speaking after Sunday’s first 30-lap race, Rory said: “The race started off really well. I felt that I got a decent gap and was managing it to the group behind, then the safety car came it and it ruined my rhythm a little bit. I was riding a bit tighter and struggled to keep the pace I had before, and I got a bit of arm pump. For the last eight laps it was a case of gritting my teeth, trying to defend and fight back, and it was shame I didn’t have anything left to take it to Lee and Jason in the end.”

Starting from pole position by virtue of his new lap record, the local star again got the hammer down as soon as the lights went out. Setting a 47.485 second lap on lap two, a time that would prove to be the fastest lap of the race by two-tenths of a second, Skinner built up a gap but unfortunately pushed the front end too hard and crashed out of the lead on the fifth lap.

“Nothing beats racing at Knockhill,” Rory added. “The sun was shining and the fans were out in big numbers. I’m sorry to them and to the team for not bringing home a result in race three. I’m disappointed with it, but I can take the positives and I suppose it is better to crash out of the lead and be going forwards, than to be going backwards. I’m looking forward to the next round at Brands Hatch. I’ve got a great team behind me. We’re improving all the time and I’ll keep doing what I am doing and chipping away at things bit by bit.”

Despite the final race crash, Rory’s first non score in 2022, Skinner leaves the Knockhill one place higher in the championship than he arrived – moving up to fourth in the standings as the series takes a five week break ahead of round five at Brands Hatch.

Rory’s new lap record also gives him Knockhill’s ‘Flying Haggis’ award, a trophy named in honour of Scottish legend Steve Hislop and given to the rider setting the fastest lap of the meeting during the annual British Superbike meeting.