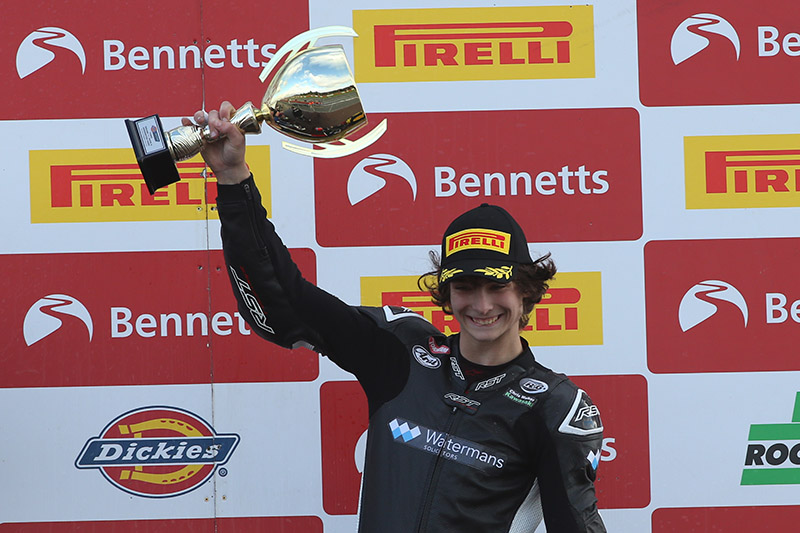 The 18-year-old held third place behind the dominant Integro Yamahas of double champion Jack Kennedy and 2019 runner-up Brad Jones for most of the race, and came out on top of a thrilling last lap battle with multiple supersport race winner James Westmoreland on Kawasaki UK’s officially supported ZX-6R.

Despite some unsettled weather during the day, the race took place in dry but windy conditions. Starting from sixth on the grid, Skinner made a good start to contest third with Westmoreland by the end of the first lap, before moving into third and holding the position for the next nine laps. Westmoreland and Tom Oliver stayed in touch, with the experienced ‘Westy’ overtaking Rory towards the end of lap 12 to set up a thrilling final six laps. Oliver made his bid for the podium but crashed out with two laps to go, and as the riders went into the final lap, it was Westmoreland who held a small advantage in the battle of the Kawasakis.

Not to be defeated, Rory passed his rival as they battled through Donington Park’s fast Schwantz Curve and although Westmoreland was able to briefly snatch the lead as they went through the penultimate corner for the final time, Skinner was able to cleverly cut back and put his privateer machine on the podium for the first time.

“I’m delighted to finally get on the podium,” said Rory. “We’ve been making improvements all season and have been close on a few occasions, only for bad luck to strike us, so it felt sweet to stand up on the podium with Jack and Brad.

“I made a good start but it was really tough to try and make a break as the wind was very strong and changeable, so I had to play it safe with my braking markers as the conditions were changing every lap.

“I knew that James and Tom would be tough opponents as they are fast and experienced riders but I led the group for so long I wasn’t going to give up the podium without a fight! Thankfully I was able to get to the apex of the Melbourne Hairpin first and repass Westy. It was a good and clean battle, and it’s brilliant to have taken the podium and beat the official Kawasaki team in a fair and square battle.

“It feels especially good because for so long it looked like Assen would have been our final round and so I have to thank all my sponsors, both those who have been with us all season and those who came on board after Assen – we wouldn’t have been here without any of that support, so this is for them.”

Sunday’s result made up for the disappointment of Saturday’s Sprint race. Rory had stunned the championship by splitting the Integro Yamahas during Saturday morning’s qualifying, setting a time that would have been good enough for fifth place on the grid at July’s World Supersport round at the same venue. Unfortunately the team was unable to translate the qualifying result into a podium finish after an overinflated tyre caused handling and traction issues, although Rory was able to come in and remedy the problem in order to go out and set a qualifying time for Sunday’s 18-lap Feature race, he unfortunately finished outside of the points.

The championship concludes in two weeks’ time with Rory looking to defend, or even improve upon, his seventh place in the points’ standings.