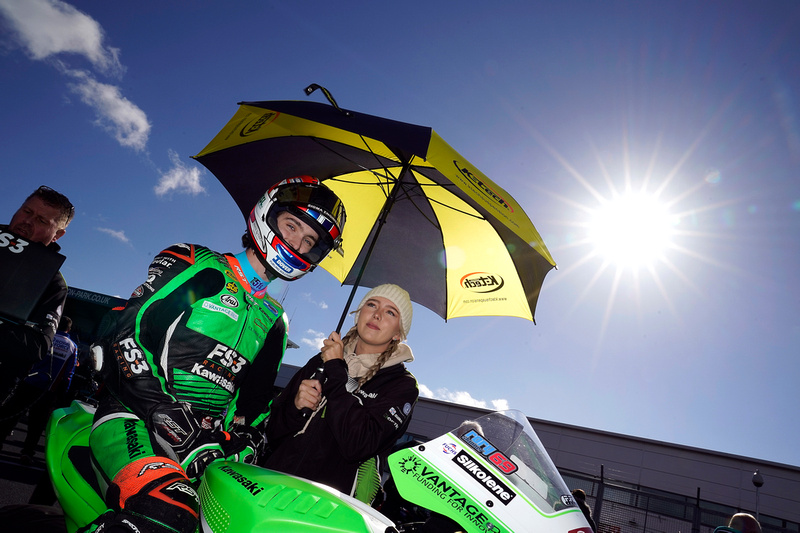 Rory Skinner’s ‘crazy’ debut season in the Bennetts British Superbike Championship comes to a close at Brands Hatch this weekend, with the FS-3 Racing Kawasaki rider looking to end his rookie year on a high.

The recently turned 20-year-old Scot goes to the Kent circuit on the back of a promising weekend last time out at Donington Park, where his results in the wet races didn’t quite manage to match the pace he showed in the dry practice sessions.

“I felt good on Friday and was running in the top 10, so it was a shame we weren’t able to get the results to match that,” said Rory. “I got caught out on the out lap in the wet Saturday race, slipping off at Starkey’s on about 30% throttle. The team did an amazing job to get the bike back together and I was able to start at the back of the grid and finish 10th. Unfortunately we had an engine issue on Sunday, in the only dry race, probably as a result of the bike going down on Saturday. It was wet again in the last race and I was probably still trying to build my confidence up in the wet again and took a 12th.

“It’s good to have had a week off and I’m looking forward to going back to Brands Hatch. It’s been a whirlwind of a season. The late start to the year meant that it’s been non-stop. It’s three months since we were at Knockhill, yet it feels like only yesterday since we were there. It’s crazy, and it’s been hard to digest things with so many back-to-back races. Brands Hatch is a track I enjoy racing at. I had some good results there earlier in the year and I’ve gone well in supersport too, so I am hoping to end the season my first superbike season on a high.”

For fans not able to make it to Brands Hatch, the action is again live on TV through the Eurosport networks.