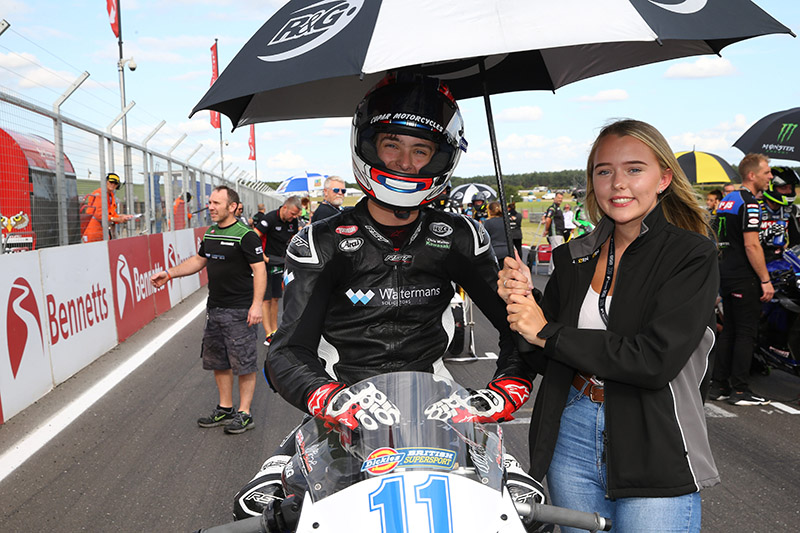 Dickies British Supersport Championship rookie Rory Skinner is set to make his first big bike appearance at the iconic Cadwell Park circuit at Lincolnshire this weekend, as his Watermans Team MSR squad gear up for a strong end to their debut season.

Rory’s only previous appearances at the quintessentially British parkland circuit came five years ago when, as a 12-year-old, he rode an Aprilia RS125 to the prestigious Superteen title, but with a junior career spent mostly riding in Spain, the 17-year-old Scot will have to relearn the circuit on his Chris Walker Kawasaki supplied ZX-6R during Friday’s Free Practice sessions.

Cadwell’s undulating twists and turns provide a stark contrast to the wide open spaces of Snetterton and Thruxton that have played host to the previous two rounds, and ‘The Party in the Park’ is always one of the best attended races of the season, thanks to the proximity of the track to the spectators, as well as the spectacular ‘Mountain’ section where the bikes jump through the air like motocrossers.

“I last rode at Cadwell in 2014, and that was on a production 125, so I don’t really know what to expect this weekend,” says Rory. “The last couple of rounds have been challenging and it’s felt a little bit like that for every step forward we’ve made, we’ve taken one backwards too. We had a lot of niggly problems with the bike early in the season. We managed to fix them after Knockhill and have been able to finish both races at Snetterton and Thruxton, but we’ve been struggling a bit with set-up and that’s affected our results.

“Stuart and Alan have done a great job with the engine but at the last two rounds we’ve been suffering with big chatter problems in the long, hanging corners and that has been frustrating. I felt a bit disappointed to come away from Thruxton with a seventh and a ninth but it was the best we could do in the circumstances. At the end of the day, I’ve been the top Kawasaki rider in the races and qualifying at both those circuits, so hopefully it’s just the characteristics of those tracks that haven’t suited our bike as much as the others.

“I’m actually looking forward to Cadwell. It should be fun to ride and the crowd will make for a great atmosphere. This is the last of the three tracks we always knew would be a challenge, due to our lack of track knowledge, but I think that if we can find a good set-up then Cadwell will suit my style. After that, we end the season by returning to three of the tracks that we’ve already been to this year, as well as Assen, which I’ve got a lot of experience of on the smaller bikes.”

For fans unable to make it to Cadwell Park, the races are broadcast live on British Eurosport 2. Saturday’s 12-lap Sprint race is scheduled for a 17:15 start, with the 16-lap Feature race due to start at the usual time of 15:40 on Sunday.