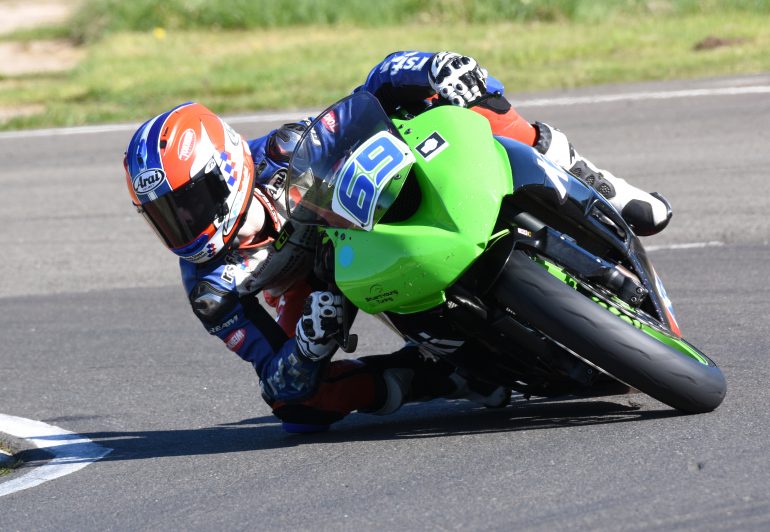 Rory Skinner had another strong weekend aboard the Kirkcaldy Kawasaki Superstock ZX-6R in the Formula 600 Scottish championship races at East Fortune this weekend, taking pole position and a race win at the airfield circuit, as well as dipping under the existing lap record for the Stock 600cc class.

After qualifying on pole position in his first race meeting at the East Lothian track in four and a half years, Rory was unable to start the day’s first race when his front wheel was damaged during an incident on the formation lap.

Misfortune again struck the 16-year-old Perth rider during the weekend’s second race, held on Sunday morning, when his rear tyre started losing pressure and he was again forced to pull out. Reverting to used tyres, the former Red Bull Rookies racer bagged a solid third placed finish in Sunday’s Scottish championship race, before ending the day on a high with a barnstorming win finishing 4.5 seconds ahead of the second place rider.

“It was a good weekend,” said Rory. “We made some changes to the bike after Knockhill, upgrading the front suspension and fitting a race exhaust system, and it felt really positive. I was able to take pole position in slightly damp conditions but unfortunately the wheels got damaged when I clipped the inside of the track on the out lap for the first race. The front wheel was bent and I couldn’t start, but we discovered that the rear was also losing pressure during the second race, so we put on our spare wheels for the third race, Those tyres had already done around 90 laps of Knockhill at the first round and I was really struggling for grip, so I was happy to take third at the final chicane. For the last race we were able to put the new tyres on our spare wheels and the bike felt absolutely fantastic. It felt great to take another win and I am really enjoying riding the 600. Big thanks again to Kirkcaldy Kawasaki for supplying me with the ZX-6R for this season, as well as Stuart Young Tuning for setting my bike up on his dyno and my Dad for preparing it and to all my other sponsors, including my long term backers, Tokheim and Bennetts, who are supporting me again this season.”

Rory’s next scheduled race is the second round of the British Talent Cup, held alongside the Superbike World Championship at Donington Park on the weekend of 25-27 May,