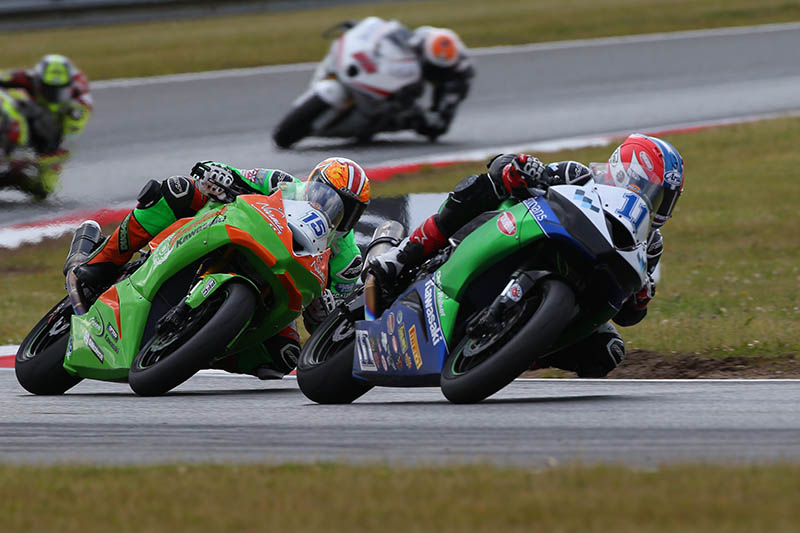 Rory Skinner posted another ninth place finish in the 2019 Dickies British Supersport Championship Sprint race at Snetterton today, coming through from 12th on the combined Supersport/GP2 grid and overcoming some small mistakes, which dropped him to 13th at one stage in the short, 10 lap, race.

Up to the race, it had been a challenging weekend for the Watermans Team MSR squad, as they struggled to find a good chassis set-up on the Chris Walker Kawasaki supplied ZX-6R. The rookie team suffered from serious chatter problems during Friday’s free practice session, and although some serious set-up changes saw the problem eliminated for Saturday morning’s 25 minute qualifying session, the 17-year-old rider couldn’t quite find the ideal feeling with his Kawasaki and found himself on the fourth row of the grid.

Further changes for the race improved the chassis and Skinner was able to put in his fastest laps of the weekend as he moved up to seventh in class by lap three, only for a mistake to drop him down five places on the road on lap four. He was able to regroup and renew the battle for seventh, only for another error on the last lap see him lose time and come home ninth in class for the fourth time this season.

“I felt that I had the pace to run with the group in front but, unfortunately, I made too many mistakes,” said Rory. “We made some big changes to the bike and I wasn’t sure how it was going to feel until we were out there, but it was definitely a step forward.

“I was having a good battle with some of the GP2 riders when I ran wide and got dirt on my tyres. I thought that they would be clean but unfortunately I tipped in and the bike went sideways and caused me to run wide and lose places. After that I was able to battle with Richard Kerr, but on the last lap I made a mistake on my downshifting, narrowly avoided crashing and dropped another place. I’m not normally a wild rider, but a few mistakes cost me a couple of places today.

“We’ve made progress with the set-up throughout the weekend and it’s good to be the top Kawasaki again. Hopefully I can make a good start and run a little bit higher up the field tomorrow.”

Tomorrow’s 15 lap Feature race is scheduled for 15:40 and can be seen live on British Eurosport 2.