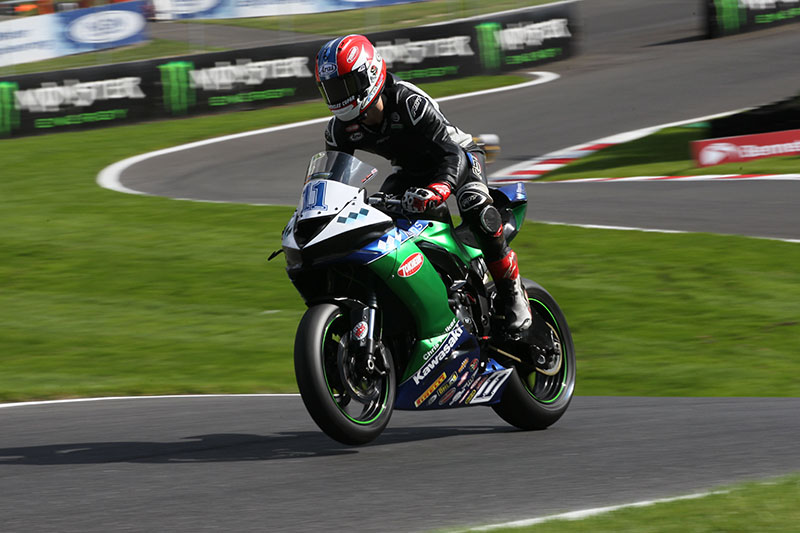 The 17-year-old, making his first appearance at the classic British circuit since his Superteen winning season in 2014, qualified his Chris Walker Kawasaki supplied ZX-6R in 12thplace on the combined GP2/Supersport grid, and ninth in his Dickies British Supersport class.

A good first lap saw the British Talent Cup champion retain his track position and tack onto the back of the group that would fight for third place, with his Stuart Young Tuned Kawasaki recording the fastest speed through the speed trap of any bike in the race, at 151.1mph.

Unfortunately, on lap two, Rory made a small mistake in his approach to the Mountain section, the unique jump where the bikes fly through the air, and was spat off his machine on landing. Rory was taken to the medical centre with an arm injury but is hopeful of taking his place in tomorrow’s 16-lap Feature race.

Speaking after the race, Rory said: “I’m gutted. I got a good start and was feeling comfortable but I messed up my line in the corner before the Mountain, and that meant that I hit it wrong and went down on landing. I’ve landed on my arm and have got a nasty cut on my elbow, which hopefully the doctors will be able to clean up tonight.”

With no lap time set in the race, Rory will start tomorrow’s race from 18thon the grid. The race can be seen live on British Eurosport 2 and can be followed (through live timing and radio commentary) at www.britishsuperbike.com