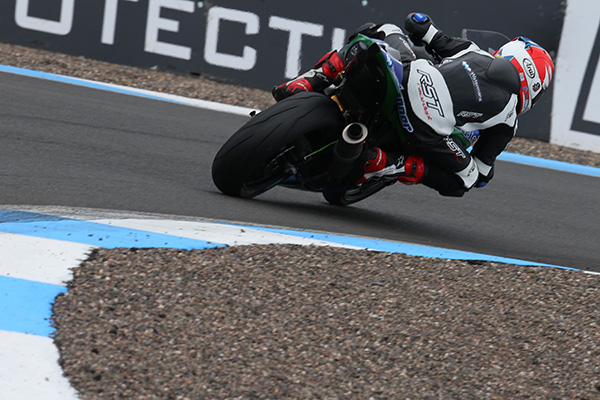 A number of technical issues denied Rory Skinner the opportunity to stand on the podium at his home round of the 2019 Dickies British Supersport Championship, at Fife’s Knockhill circuit, with his Watermans Team MSR Kawasaki rolling to a halt less than four miles from the flag in yesterday’s 26-lap feature race.

The 17-year-old British Talent Cup champion had been sitting in a comfortable third place in the supersport class at the time of his retirement, after a strong showing in his rookie season.

Saturday had seen the Perth teenager qualify third in class (fifth on the combined GP2/supersport grid) despite an intermittent electrical problem causing the bike to cut out and curtailing his session, before the evening’s 18-lap sprint race was postponed due to heavy rain.

With the problem re-emerging in Sunday morning’s warm-up session, Rory and his team voluntarily opted to start from pit lane for safety reasons as there had been no opportunity to fully test the repairs carried out. With no problems in the wet race, Skinner carved through the pack to equal his best finish of the season, fifth, and secure fourth place on feature race grid thanks to his best lap time. Agonisingly, the machine was unable to reach the flag in the main race, leaving the young Scot with just 11 championship points to show on a weekend where two podium finishes were a distinct possibility.

“Gutted is an understatement,” said Rory. “Wet or dry, we had podium pace all weekend but unfortunately we were plagued by technical issues once again. We had an intermittent electrical problem in qualifying that caused the bike to cut out and despite the best efforts of the team, it re-emerged in the morning warm-up. They worked hard to trace and fix the fault between warm up and the morning sprint race, but without the chance to test it we decided as a team to start from the back as it was too big a risk to start from the second row and potentially cut out in front of a pack of riders. We decided to use the race as a test and to set a good lap time for the feature race. In the end, the bike worked well in the wet and I was able to get through to fifth in class, which was a little frustrating as the race was only 15 laps long and we had the pace of the leaders.

“Our time gave us fourth on the grid for the afternoon race and I was able to get a good start and run a consistent rhythm. I was running in a safe third, six seconds ahead of Alastair Seeley, when the bike stopped with three laps to go.

“It’s disappointing and we need to sit down as a team and decide a direction for the second half of the season. Unfortunately we’ve struggled with bike problems at every round this year and we can’t continue like that. We’re in a minority in running the Kawasaki 636 and we are a tiny team, so the lack of tuning parts and technical experience are making things difficult when trying to put together a competitive and reliable supersport bike on a limited budget. Personally, I feel that I am riding as well as ever and I proved today that I am capable of riding a 600 well, but something needs to change if we are to move forward.”