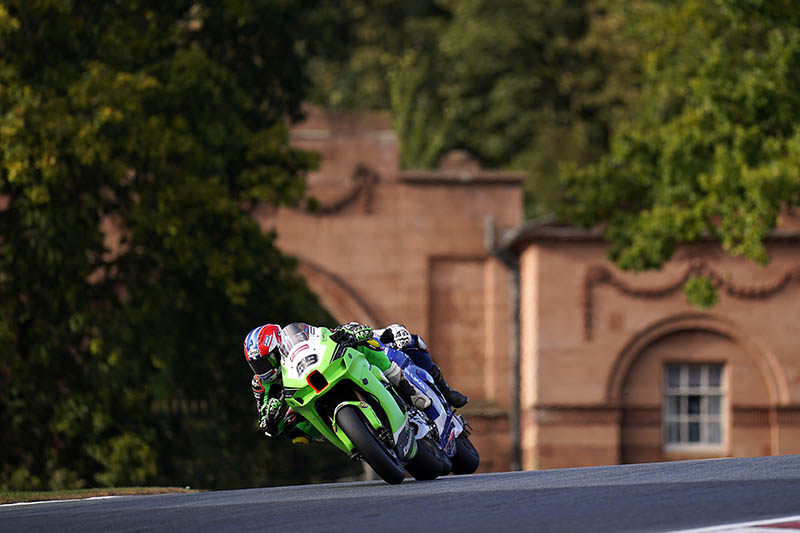 Rory Skinner enjoyed a consistent weekend at Cheshire’s demanding Oulton Park circuit, posting three points scoring finishes, with results of 11th, 11th and 10th, to move him up to 11th overall in his first season in the Bennetts British Superbike Championship.

In his last race meeting as a teenager, the FS-3 Racing Kawasaki rider posted the 12th best time in Saturday morning’s damp qualifying session, and narrowly missed out on another top 10 finish in the afternoon’s 14-lap race, being pipped on the line by fellow Kawasaki rider Storm Stacey.

Sunday’s two 18-lap outings proved to be lonelier affairs, with the 2020 British Supersport Champion lapping consistently to bring his ZX-10RR home in strong points scoring positions both times, closing the gap to the podium finishers to 18 seconds around a circuit that has proved something of a bogey track in the past.

Speaking after the races, Rory said: “It’s been a bit of an up and down weekend but overall I am fairly happy. I didn’t quite have the pace of the front guys this weekend, and two 11ths and a tenth isn’t really where I want to be, but we made good progress. We could have done without it being wet on Saturday morning, as we had some set-up changes to try but weren’t able to. I’ve struggled at Oulton Park before and had arm pump problems at the start of the season, but I was able to put in three consistent races this weekend and made progress throughout the weekend, putting in my fastest ever laps around here in the final race.

“Now I’m looking forward to Donington Park next weekend. It’s a track I’ve gone well at in the past and it should be really tight around there. The racing is so close and competitive in this championship, so hopefully I can make that small step and get back to where I want to be.”

The penultimate round of the Bennetts British Superbike Championship takes place at Donington Park next weekend (1-3 October).