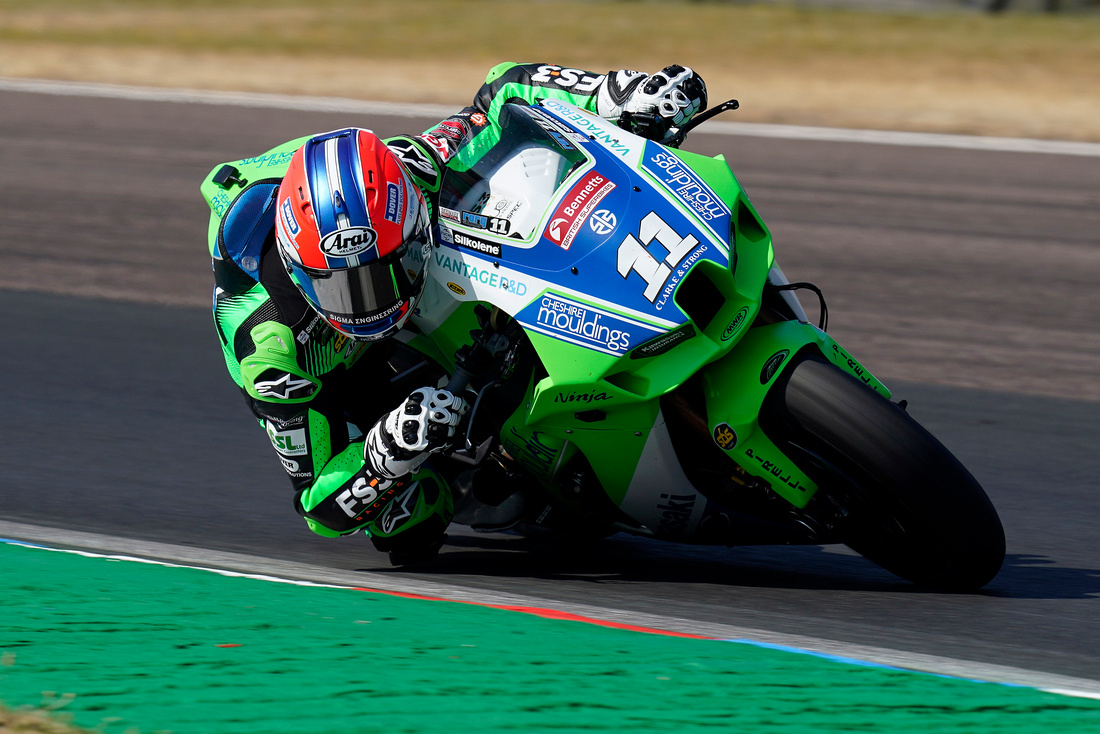 Rory Skinner retained his fourth position in the Bennetts British Superbike Championship following a strong weekend which saw him post his best ever results around the fast Thruxton race track.

The Cheshire Mouldings FS-3 Racing Kawasaki rider posted two seventh place finishes and a ninth around a circuit he has only visited twice before. The results see him retain his place in the all-important top eight ‘Showdown’ positions, with two more rounds left to decide the eight ‘title fighters’.

Extreme temperatures met the teams at the most demanding circuit on the British Superbike calendar, which sees an average lap speed of over 110mph and top speeds approaching 200mph. Even in cool conditions the circuit is notorious for high tyre consumption and slipstreaming battles, with the races as much about managing tyre wear as they are pushing to the absolute limit, and with track temperatures regularly exceeding 40°C, this year’s event proved more challenging than ever.

After qualifying in 11th, Rory was able to move up to finish seventh in Saturday’s 15-lap eBay sprint race. The 20-year-old from Perth was able to replicate that result in Sunday’s opening 20-lap race, his 50th in the superbike class, and he was on target for a trio of sevenths in the weekend’s final outing – only to miss out in a last lap slipstreaming battle and come home ninth.

Speaking after the race, Rory said: “We always knew that this weekend would be difficult for us but we’ve come away with three solid top 10 finishes and maintained fourth in the championship. It was so hot this weekend but we’ve made a lot of progress with the bike set-up in these high temperatures and overall there are a lot of positives. The top three were on another level in all three races, but we were competitive with the rest of the field and just half a second from fifth in the final race, so that’s good progress at a circuit where I don’t have a lot of experience.”